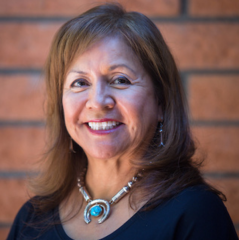 Laura Tohe has written and co-authored five books. "No Parole Today" (1999) won Poetry of the Year awarded by the Wordcraft Circle of Native Writers and Storytellers and was nominated for a Pushcart award. "Tseyi, Deep in the Rock" won the 2007 Glyph Award for Best Poetry and Best Book by Arizona Book Association and is listed as a Southwest Book of the Year 2005 by the Tucson Pima Library. Her most recent book, "Code Talker Stories," is an oral history book about the remaining Navajo Code Talkers. She writes essays, stories, and essays that have appeared in the U.S., Canada, and Europe. Her commissioned libretto, "Enemy Slayer, A Navajo Oratorio," made its world premiere for the Phoenix Symphony in 2008.

Her awards include the 2006 Dan Schilling Public Scholar for the Arizona Humanities; the Joy Harjo & the Lila Wallace Reader’s Digest Fund Award; ASU Faculty Exemplar for 2009-2014. She is the Navajo Nation Poet Laureate for 2015-2019. She is currently writing a libretto for an opera on healing with composer, Thierry Pecou, scheduled for production in Europe in 2019.