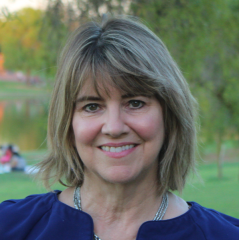 In her work managing ASU’s Stardust Center for Affordable Homes and the Family, and in her 25 years at ASU, Lauren has championed sustainable solutions and healthy communities, bringing together the ASU community, cities, local businesses, nonprofits, and neighborhood organizations to address housing insecurity and its connections with the social determinants of health.

In her tenure at ASU as a Sustainability Scientist and now a Global Futures Scientist, Lauren has helped create many grants and initiatives related to sustainable water management, energy, ecosystem health, and urban ecology.

Lauren was elected to the Tempe City Council on a sustainability platform in 2014 and re-elected in 2018. She is a 34-year resident of Tempe and longtime community leader who advocates for worker protections, equity, and climate-change action.

Lauren is a recognized national champion for cities as incubators of innovation. Veteran journalist Juan Gonzales featured her in his book, Reclaiming Gotham, citing her as evidence of the growing movement of cities taking progressive action and challenging legislative interference in local democracies.

As a Tempe councilmember, she has led Tempe's efforts for social, economic, racial, and environmental justice, including equal pay, earned sick days, affordable housing, climate action planning, urban forestry, animal welfare, government transparency, and campaign-finance reform. She spearheaded a dark money disclosure amendment to the City’s charter, garnering 91.44% support from the voters. For her efforts exposing the corruptive influence of money in politics, Lauren was featured in the inaugural episode of MSNBC’s docuseries, American Swamp.

Lauren earned a bachelor’s degree in Early American History from the University of Chicago and a master’s degree in Public History and a Certificate in Scholarly Editing from ASU. She resides in central Tempe with her husband, Mike, a professor at ASU’s School of Geographical Sciences and Urban Planning. Mike and Lauren have raised two daughters, Nora and Olivia, in Tempe.

The Arizona Republic named Lauren as one of the “Top 5 People Who Made a Difference in Tempe,” citing her advocacy on homelessness and environmental issues.

City of Tempe Councilmember (2015 to present)

Feast on the Street, Organizing Committee