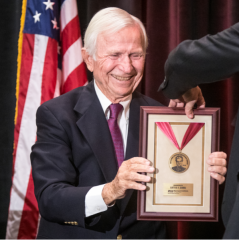 Lattie F. Coor is President-Emeritus, professor and Ernest W. McFarland Chair in Leadership and Public Policy in the School of Public Affairs at Arizona State University, and is chairman and CEO of the Center for the Future of Arizona.

Earlier in his career, Coor served as an assistant to the Governor of Michigan and held faculty appointments in political science at Washington University. His administrative responsibilities there included those of assistant dean of the Graduate School, director of International Studies, and uUniversity vice chancellor.

Coor has held positions with a variety of higher education associations, board and commissions, having served as a founding member and chairman of Division I of the NCAA President’s Commission. He held the position of chairman of the National Association of State Universities and Land Grant Colleges in 1992-93, and served on the Board of Directors of the American Council on Education from 1990 to 1993 and again from 1999 to 2002. He also served on the Kellogg Commission on the Future of State and Land Grant Universities from 1996 to 2002. He served as a trustee of the American College of Greece, Athens, from 1988 to 1998, and has served as a member of the Board of Trustees of the Deer Creek Foundation, St Louis, since 1983. He has honorary degrees from Marlboro College, American College of Greece, the University of Vermont and Northern Arizona University.

In Arizona, Coor serves on the Board of Directors of Blue Cross/Blue Shield of Arizona, and has served on the Board of Directors of Bank One Arizona, Samaritan Health Services, Greater Phoenix Economic Council, and is a member of the Greater Phoenix Leadership Council. He was a member of the Arizona State Board of Education from 1995 to 1999. He served as Chairman of the Education Section of the Valley of the Sun United Way Campaign from 1990 to 1993, and of the Public Sector of the United Way Campaign from 1999 to 2002.

An Arizona native, Coor was born in Phoenix and graduated with high honors from Northern Arizona University in 1958. He pursued graduate studies in political science at Washington University in St. Louis, Missouri, earning a master’s degree in 1960 and a doctorate in 1964.