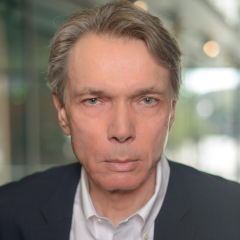 William Dabars is senior research fellow for University Design and senior director of research for the New American University in the Office of the President, Arizona State University. He is a research professor in the School for the Future of Innovation in Society and a Senior Global Futures Scholar in the Julie Ann Wrigley Global Futures Laboratory. He is also a fellow of the Institute for the Future of Innovation in Society and an affiliate scholar in the Consortium for Science, Policy, and Outcomes (CSPO). He is the coauthor, with Michael M. Crow, of The Fifth Wave: The Evolution of American Higher Education (Baltimore: Johns Hopkins University Press, 2020) and Designing the New American University (Baltimore: Johns Hopkins University Press, 2015). The latter book has been translated into five languages.

He received a PhD in history from the University of California, Los Angeles (UCLA). Although his primary field at UCLA was European intellectual history, his subsequent research and publications focus on the emergence and evolution of the American research university. Associated research areas include disciplinarity and interdisciplinarity, knowledge production, organizational sociology, and responsible innovation.