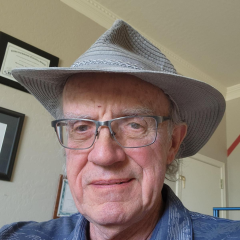 In 2003, Michael Thorpe joined  Arizona State University as Foundation Professor, and later became the founding director of the Center for Biological Physics. He previously held faculty appointments at Yale University and Michigan State University where he retired as University Distinguished Professor. His research interests are in the theory of disordered systems, with a special emphasis on properties that are determined by geometry and topology. He has a research background in condensed matter theory, and in recent years has developed the mathematical theory of flexibility and mobility for use in glassy networks, and also in crystalline materials with disorder. His has alsom worked  in biological physics. The flexible regions in proteins and protein complexes are determined from the x-ray crystallographic structure. These are used to determine dynamical pathways between different protein conformations using geometric simulation techniques. Proteins are stable enough to maintain a three-dimensional structure, but flexible enough for biological function.

The aim of all his research work is to find underlying topological and structural principles and unifying concepts. He is currently visiting Professor of Physics at Oxford University (2012-2018) in England for part of each year.