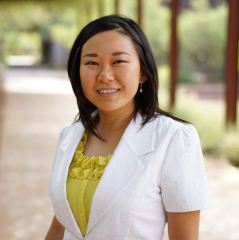 Ding Ding Zheng has spent her career focusing on educational equity, student success, effective communication, and grant management. As the project coordinator for the National Science Foundation Research Traineeship (NRT) grant project, Citizen-Centered Smart Cities and Smart Living, housed within the Center for Cognitive Ubiquitous Computing (CUbiC) in the School of Computing, Informatics, and Decision Systems Engineering in the Ira A. Fulton Schools of Engineering, she works with graduate students from various backgrounds, especially underrepresented minority students, female students, and students with disabilities. Ding Ding previously served as the coordinator for the TRIO Student Support Services grant program at ASU Polytechnic, and worked with first-generation college students, low-income students, and students with disabilities. Before that, she worked as an academic advisor in the College of Technology and Innovation (which has since merged with Ira A. Fulton Schools of Engineering) helping students succeed and graduate.

From 2014 to 2017, Ding Ding served as the Public Relations Chair for the Arizona Chapter of WESTOP. In this role, she researched and collected annual performance report data from each of the TRIO projects within the state of Arizona. This data, together with information from various state and federal reports, then had to be analyzed and compiled into an annual, informational Fact Book and Fact Sheet. These two documents were, in turn, used each year by representatives of the AZ TRIO projects when they traveled to Washington, D.C. to lobby Congress for continued support of and funding for TRIO programs nationwide.

Bachelor of Arts in English Literature, May 2008. College of Liberal Arts and Sciences, Arizona State University.

Bachelor of Arts in Japanese Language, May 2008. College of Liberal Arts and Sciences, Arizona State University.