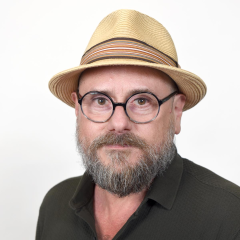 Claudio Vekstein (Buenos Aires, 1965) has been teaching and researching as a tenured professor of architecture at The Design School, Arizona State University, and has been running his public architecture practice as principal of the award-winning estudio eCV_Opera Publica based in Buenos Aires, Argentina.

His recently built public works include, among others: the Memorial to the Alcorta Uprising, the Montessori School in Lujan, the Mill Cultural Factory in Santa Fe, the Memorial Square to Ernesto Guevara in Rosario, the Forum for Arts and Sciences, the Emergency Room for the Municipal Hospital, the Institute for Rehabilitation of the Disabled, the River Coast Park and Amphitheater, the Monument Homage to Amancio Williams, all them in Vicente López, the Access to Ernesto de la Cárcova Museum and the Extension for the Fine Arts School, all in Buenos Aires, Argentina as well as other projects in the U.S., Cuba, Paraguay, and Venezuela.

Vekstein was the last disciple of South American master architect Amancio Williams, completed master studies at the Städelschule Academy of Arts Frankfurt, Germany, under Professors Enric Miralles and Peter Cook and undergraduate studies at the School of Architecture, Design and Urbanism (FADU) from Buenos Aires University.