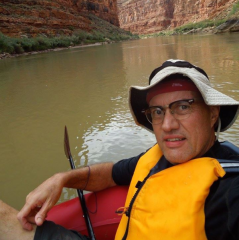 Dan Hunting is the Associate Director of Enrollment Analysis at ASU. Duties include forecasting enrollment and financial aid a the university. His research interests include education policy, workforce development, budgeting, demographics and urban growth.

Hunting has authored several foundational works that have informed Arizona policy discussions in recent years including Finding & Keeping: Educators for Arizona’s Classrooms an analysis of the state’s teacher shortage, and Sun Corridor: A Competitive Mindset (co-authored with Grady Gammage, Jr.) which described the complex connections between the economies of Phoenix and Tucson.
These publications clarify complex policy issues for a wide audience through concise writing backed by quantitative and qualitative analysis. This analysis is supported with skills in statistics, geographic information systems, survey design and the interpretation of large datasets. An articulate speaker, Hunting often serves as the voice of Morrison Institute in media interviews and public presentations.

Prior to his tenure at Morrison Institute, Hunting authored Tucson’s New Prosperity: Capitalizing on the Sun Corridor, an analysis of Tucson’s economic development options for the Sonoran Institute. He also wrote a series of papers on state trust land issues, including The Quarrel Between Past and Present: The Economics of Reforming Arizona’s Century Old State Trust Land Rules, as well as an extensive study of the connection between conserved public land and Arizona’s ability to attract and retain a skilled workforce.

As a fiscal analyst for the Joint Legislative Budget Committee, Hunting gained insight into the workings of Arizona state government. Duties included budget development and program analysis for nine state agencies, including Arizona Department of Environmental Quality and the Department of Administration.