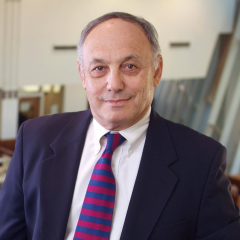 Jonathan Rose is Professor of Law and Willard H. Pedrick Distinguished Research Scholar Emeritus at the Sandra Day O’Connor College of Law at Arizona State University, where he taught Contracts, English Legal History, Legal Ethics, and Antitrust. He has received several awards for outstanding teaching. He has been a professor at the College since 1968 and was Associate Dean from 1987-90. He graduated with honors from the University of Pennsylvania in 1960, and from the University of Minnesota Law School magna cum laude in 1963, where he was Senior Editor of the Minnesota Law Review. Professor Rose is the author of numerous articles, reports and book reviews in the areas of legal history, antitrust, occupational and economic regulation and legal ethics. He is an affiliate of the College of Law's Center for the Study of Law, Science, & Technology and ASU Lincoln Center for Applied Ethics. He is a member of the Selden Society, the American Society of Legal History, and the American Law Institute. He has also served on numerous professional and governmental committees and boards, and as a consultant for various departments of the state of Arizona, including as a Special Assistant to Governor Bruce Babbitt and a member of the Governor’s Regulatory Review Council and Arizona Board of Legal Specialization. He has frequently testified before United States and Arizona commissions and legislative committees.

After spending most of his career focusing on antitrust, regulation, and legal ethics, he has changed direction. His current primary scholarly interests involve medieval and early modern English legal history and his research is focused on the history, regulation, and functioning of the legal profession and the operation of the legal system in medieval and early modern England. He has presented papers on these topics at numerous conferences and law school workshops. He recently published a book, "Maintenance in Medieval England" (Cambridge University Press, 2017)..