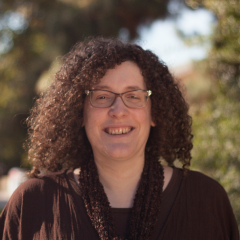 Almira Poudrier is senior lecturer in the School of International Letters and Cultures at Arizona State University. Her research interests include Greek history and religion, particularly the material culture of religious space and cult described in Herodotus. A specialist in teaching first-year Latin, she teaches many of the lower division Latin courses at ASU as well as frequent courses in ancient Greek and Roman language, myth, culture, the classical tradition, and comparative literature. As faculty sponsor of Solis Diaboli (the Classics club on campus), and as liaison for Apples + Archaeology, she organizes the yearly Fall Forum in Classics, as well as classroom visits and several outreach activities both on and off campus. She organizes the annual international poster contest at the SILC Language Fair. She also serves as vice-president of the Central Arizona Society of the Archaeological Institute of America, which brings monthly lectures on archaeology and material culture from national and international scholars to the Valley. As the organizer of the Arizona Center for Medieval and Renaissance Studies (ACMRS) Medieval Latin Research Group, she leads weekly reading sessions in translating medieval and Renaissance Latin authors like Bede, Saxo Grammaticus, Geoffrey of Monmouth, and many others. She was also a member of the American School of Classical Studies at Athens Summer Session 2000.