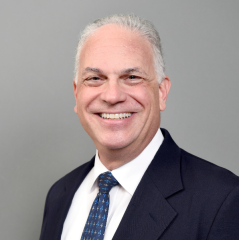 David Schildkret joined the ASU faculty in 2002. He holds the Doctor of Music and the Master of Music degrees in Choral conducting from Indiana University School of Music, where his primary teachers were Robert Porco and George Buelow. He earned the Bachelor of Arts in Music degree from Rutgers University, where he studied with David Drinkwater and F. Austin Walter.

Schildkret conducts the ASU Choral Union, Chamber Singers, and Barrett Choir, which he founded in 2011. He teaches classes in conducting, score study, and a General Studies course on music and humor.

In addition to teaching at ASU, he is the music director of the Mount Desert Summer Chorale in Bar Harbor, Maine, and is director of music at Scottsdale United Methodist Church.

As a member of the Fulbright Senior Fellows roster, he has traveled twice to Venezuela, where he has conducted the State Orchestra of Merida, numerous choirs, and was stage director and conductor for a bilingual production of "You’re a Good Man, Charlie Brown," the first time this musical was presented in Venezuela.

Prior to coming to Arizona State University, Schildkret taught at the University of Rochester, Centre College in Danville, Kentucky, and Salem College in Winston-Salem, North Carolina, where he was dean of the School of Music. He returned to Salem as a visiting scholar during his sabbatical year in 2009–10.

His articles have appeared in the newsletters of the Mozart Society of America and the Society for Seventeenth-Century Music, in the Choral Journal, Bach, Eighteenth-Century Life, and the NATS Bulletin. He has published reviews in the American Choral Review and has written liner notes for numerous recordings.

Music of the Eighteenth Century

Relationships between the arts, especially literature, painting, and music