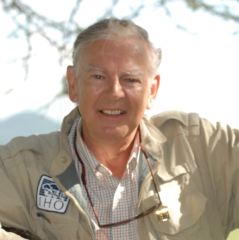 Donald C. Johanson is the Virginia M Ullman Chair in Human Origins in the School of Human Evolution and Social Change and the Founding Director of the Institute of Human Origins. For the past 30 years, he has conducted field and laboratory research in paleoanthropology. Most notably, he discovered the 3.18 million year old hominid skeleton popularly known as "Lucy." Through grants from the National Science Foundation, the L.S.B. Leakey Foundation, and the National Geographic Society, Johanson has carried out field research in Ethiopia, Yemen, Saudi Arabia, Egypt, Jordan and Tanzania. He is an Honorary Board Member of the Explorers Club, a Fellow of the Royal Geographical Society, a member of many other professional organizations and recipient of several international prizes and awards. In 1975, Johanson was appointed curator of physical anthropology at the Cleveland Museum of Natural History and, beginning in 1976, developed a laboratory of physical anthropology that attracted scholars from all over the world.

He has written, among other books, the widely read "Lucy: The Beginnings of Humankind" (with Maitland Edey), 1991, and numerous scientific and popular articles. In 1994, he co-wrote "Ancestors: In Search of Human Origins" and narrated a companion NOVA television series seen by more than 100 million people worldwide. Most recently, he published "From Lucy to Language" (with Blake Edgar, principal photography by David Brill), 1996. Johanson is a frequent lecturer at university and other forums in the United States and abroad.