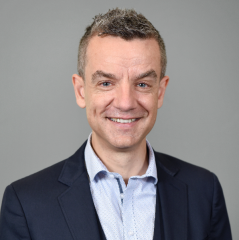 "quite simply, a superstar of the trumpet."

"No one can deny the virtuosity and flamboyant musicianship of Mr. Burgstaller. His singing tone, lightning technique, and extroverted phrasing place him in a different league."  -The International Trumpet Guild Journal-

Called “quite simply, a superstar of the trumpet” by conductor JoAnn Falletta, multi-genre international soloist JOE BURGSTALLER connects with audiences throughout the world with his captivating sound, dazzling virtuosity and engaging personality. Known for his creativity and as a story-teller with his instrument, Joe is well-known as a former long-time member and featured trumpeter/arranger with the famed Canadian Brass. He has performed in front of more than 45 orchestras (Philadelphia, Minnesota, Detroit, Houston, Baltimore, New Jersey, Virginia, et.al), in more than 50 Music Festivals, and has performed and taught at over 120 universities, conservatories and colleges.

Joe tours worldwide as a soloist (most recent appearances include Shanghai, Hong Kong, Singapore, Seoul, Taipei, Bangkok, Kuala Lumpur, Winnipeg, Hamburg, Bologna, US Virgin Islands, etc.), as a chamber musician (New York Brass Arts Trio), as a crossover artist (classical/jazz crossover group BurgstallerMartignon4), as a guest orchestral musician (recently including Guest Principal of the NDR -Hamburg, Guest Principal of the Malaysian Philharmonic, and in the section of the New York Philharmonic), and as a clinician (more than 120 universities and conservatories so far) with his groundbreaking masterclasses for all instruments called "Change Your Mind, Change Your Playing®”.

Burgstaller’s discography includes hit solo CDs (License to Thrill and The Virtuoso Trumpet) and three Top-10 Billboard hits with Canadian Brass. Joe and "License To Thrill" were the subject of an hour-long segment on Korea’s Arirang Television (100 million viewers), as well as an hour-long feature on Sirius-XM Classical Radio. His recent Classical/Jazz-Hybrid crossover CDs with Grammy-nominated pianist Hector Martignon (Bach’s Secret Files and Mozart’s Blue Dreams) were Top-50 on the JazzRadio charts and the Roots Radio Report (under Paul Simon but right above the Beastie Boys).  Joe’s inventive music videos for both Mozart’s Blue Dreams and Bach’s Secret Files were debuted worldwide by Yamaha America and Yamaha Europe in a special industry-leading video-podcast release.

As a former long-time member and featured trumpeter/arranger with Canadian Brass, Joe toured worldwide with the Brass, performing in recital and with orchestra (Philadelphia, Minnesota, Detroit, Houston, Baltimore, New Jersey, Seattle, et al.) as well as contributing arrangements to the group.  Recordings that spotlight Joe include a Juno-nominated release, Magic Horn, (AllMusicGuide.com heralded Joe's "superb set of arrangements" of Astor Piazzolla), BACH (includes his pyrotechnical arrangement of the Bach-Vivaldi Concerto in D), Legends (featuring his La Virgen de la Macarena – “Unbelievable Virtuosity” – DigitalIndie.net) and High Society ("Burgstaller's piccolo playing throughout this album is no less than perfect… I had to pinch myself for thinking that I heard a high clarinet!" - Brass Herald Magazine).  Three Canadian Brass CDs featuring Joe became Top-10 Billboard hits.

Prior to joining the Brass, Joe was one of the all-time most popular soloists at Columbia Artists’ Community Concerts (alumni include Van Cliburn and Heifetz).  He was North America's busiest trumpet recitalist, performing nearly 60 solo concerts every season with his Joe Burgstaller: The Rafael Méndez Project.  He developed a community engagement component that took the circuit by storm, and his lauded audience-building plans added over 30 new season-ticket subscribers per presenter.  As a Yamaha Artist and Clinician, Joe reached thousands of students every season, and The Instrumentalist Magazine dubbed Joe "The Next Méndez".  Dr. Robert Méndez, son of the legendary trumpeter, wrote of Joe: "He's mastered my father's works."

Joe is a founding member of the New York Brass Arts Trio, which has brought three world-class virtuoso soloists together to revolutionize the brass trio, and are being hailed as the first brass group ever to play with the sensitivity and musicality of a string quartet. Burgstaller is joined by french hornist David Jolley (founding member of Orpheus Chamber Orchestra) and trombonist Haim Avitsur (Symphony Magazine Emerging Artist), and have forged together Classical, Light Classical and Classical/Jazz masterworks of all eras and adapted them for this fantastic and versatile instrumentation.

Burgstaller was also member of New York City's Meridian Arts Ensemble (1995-2001), and with that group toured worldwide at concert halls and clubs including NYC's Knitting Factory and CBGB's, and Amsterdam's Bimhuis, twice received the ASCAP "Adventurous Programming Award" (shared with the Kronos Quartet) and recorded several of his own compositions and arrangements. Gramophone Magazine heralded Joe's original work for the MAE, Lullaby as "an understated gem."

As a teacher, he has been called a “Talent-Whisperer”, and as Associate Professor of Trumpet at Arizona State University he leads a dynamic, one-of-a-kind trumpet studio that comprehensively prepares students for the demands of today's music world, focusing on Artistic Development, Versatility, Entrepreneurship and Career Growth. His Change Your Mind, Change Your Playing classes have been met with great success (and, frankly, relief) by thousands of participants across the world as he has demystified efficient learning, peak performance, stage fright and human connection. The Armed Forces School of Music identified Joe’s teachings as an integral part of their coursework, and he served as a special clinician for all of their instrumentalists from 2012-2015.

Joe is also a pioneer in online-education, and is the creator and host of the LIVE weekly Trumpet Warmup Show, livestreamed on Facebook (averaging 2500 viewers in 20+ countries) and through BandDirector.com (access to 31,000 band directors), Yamaha Europe and Yamaha North America. The Show highlights Joe delivering warmup, pedagogical and teacher segments, and empowers his students as they host their own 2-minute segments, which include: Tips for the Entrepreneurial Student; Poetry Corner; Trumpet News; Advice for Freshman; Webmaster Q&A; Trumpet Talks with Trumpet Titans (interviews); Life Hacks; Practicing Tips; Trumpet Cultural Ambassadors (often in Chinese and Korean).

Joe was a child prodigy, beginning the cornet between at age five.  By age twelve he was improvising jazz and soloing with area bands and jazz clubs, and by fifteen was the youngest professional in the Virginia Opera Orchestra. He received both his Bachelor's and Master's Degrees from Arizona State University (studying with Regents’ Professor David Hickman). Other teachers and mentors include Anthony Plog, Stephen Carlson, Jonathan Greenburg, Gary Gompers and David Fedderly.  In 2003, Joe was awarded Arizona State University's Inaugural "Distinguished Alumnus Award" and the Inaugural "Outstanding Alumnus Award" from Eastern Music Festival.

"Burgstaller is a 'Talent Whisperer' in the truest sense, mixing intuition, experience and an uncommon talent for enabling students to rise above their own limiting beliefs."

"An absolutely life-changing experience. His teaching penetrates and explores the depth and dimension of our psyche and what it means to be a performer... rare sensitivity, commitment and expertise."

"Never in my tenure as a teacher has an artist make the impact on the students that you did."

"quite simply, a superstar of the trumpet. His prodigious technical ability is just the beginning- his stunning musicianship, gorgeous tone and absolute charm make his concerts unforgettable."

"One of the most successful classical trumpeters in North American history."

"Joe Burgstaller is not just a fabulous musician and entertainer, he is a superb trumpet player.  He demonstrates one of the purest trumpet sounds I’ve heard, and his remarkable agility and versatility across any genre is stunning.  Best of all, he is a delightful human being, and a load of fun to work with!"

"Joe Burgstaller is a superb musician and a wonderful presence on stage.  I would have him back anytime, and can’t recommend him enough."

" Joe has played Bach’s staggeringly difficult Brandenburg Concerto #2 with me many times.  His performance is always flawless, sensitive and apparently effortless!"."

"Burgstaller continually delighted the audience with his musical dexterity... indefatigable..."

"Burgstaller's piccolo playing throughout this album is no less than perfect… I had to pinch myself for thinking that I heard a high clarinet!"

" The Next (Rafael) Méndez"

"a dazzling display of what could be done with a trumpet."

"delighted the audience with an amazing display of skill and technique, a virtuosic performance, plus the passion of a display of superb musicianship."

"enthralled the audience with an almost unbelievable mastery of his instrument..."

"dazzled the audience... his playing was flawlessly stunning with perfect technique and control"

"Josef Burgstaller's fingers were a blur, with every Gatling gun-style note delivered perfectly on his piccolo trumpet during a Bach number."

“This quartet is on to something quite marvelous: a hybrid interplay between jazz and classical music - even opera - that should please fans of both genres, and expose the separatists to the virtues of each form...delightful...”

“…a superb marriage of Jazz and Classical music. Burgstaller’s tone on trumpet is gorgeous and expressive… The virtuosity of these group of musicians allows them to played with comfort either Jazz, Latin Jazz or Classical.”

“Stunning... (Mozart) surely would consider (this) hip if he revisited the planet to jam with them."

“Recommended. Very tasteful for lovers of both genres.”

“very engaging music, beautifully crafted and likely to please both the jazz and classical listener.”

“…a very entertaining jazz classical mix that served the old and young masters of both genres to all honor.”

“…a superior instrumental performance in itself, with Burgstaller's quiet trumpet stylings.”