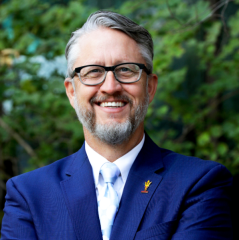 Douglas Sylvester is the 8th dean of the Sandra Day O’Connor College of Law at Arizona State University. Under his leadership, ASU Law reached historic heights ranked 24th in the nation (up from 40th in 2012, and 58th in 2008) and 7th among public law schools. From 2012-2020, the law school placed in the top 25 for employment (rising as high as #11 in 2014), hired nearly 60 faculty members, and raised nearly $80 million — more than twice the amount raised in the prior 45 years combined.

Professor Sylvester was also a driving force for the conceptualization and creation of the Beus Center for Law and Society in downtown Phoenix, which is now home to ASU Law and a number of other legal-related organizations including the innovative ASU Law Group and the Arizona Legal Center.

In 2007, Professor Sylvester was appointed special consultant to a National Academy of Sciences panel charged with reforming the U.S. Census. He was the founding faculty director of the innovative Technology Ventures Clinic which introduces students to transactional legal practice in high-technology sectors. He also has been an expert witness in cases involving licensing, intellectual property and technology, and has advised numerous entrepreneurs in building their businesses.

Professor Sylvester has published, taught and lectured on issues of intellectual property law and commercialization, international law, emerging technologies and privacy. In 2006, he taught nanotechnology and the law, the first time such a course was offered in the country by full-time law faculty.

Prior to joining the ASU, Professor Sylvester was a Bigelow Fellow and lecturer-in-law at the University of Chicago and Northwestern University, an attorney in the Global e-Commerce Practice Group at Baker & McKenzie in Chicago, and a law clerk for U.S. District Judge C. Clyde Atkins in Florida.