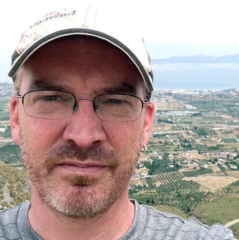 John Lynch has been at ASU since 1994 and Barrett, the Honors College since 2000. Within Barrett, Professor Lynch teaches sections of the signature “Human Event” course, along with courses on Ancient Greek drama & culture and their relevance to modern times. He has also offered courses on evolutionary thought, the history of science, and the intersections between science, philosophy, & religion.

Since 1998 he has been involved in the fight to maintain strong evolutionary principles in K-12 science standards and this has resulted in him presenting on anti-evolutionism and creationism at many public, legal, educational and scientific gatherings countrywide. He has served as chair of the Educational Committee for the International Society for the History, Philosophy & Social Studies of Biology, and was also the chair of the Committee for Education of the History of Science Society. Within Barrett, he has served as faculty chair and has also chaired its Curriculum, Personnel, and Promotion committees. He currently serves as a Dean's Fellow while developing a Barrett Pre-health Professions Advising Program.