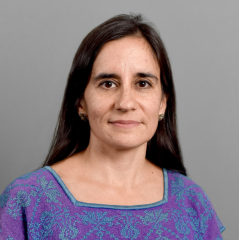 Angélica J. Afanador-Pujol specializes in the art, material culture, and architecture of the Indigenous people of Latin America in the Pre-Columbian and Colonial periods. Professor Afanador-Pujol’s research interests include indigenous agency and the social function of art as it intersects with race and ethnic relations, justice, political interests, and consumption in early sixteenth-century Mexico.

Her current project deals with the representation and function of food among Indigenous images in 16th-century Mexico.  She is also co-authoring a book with historian Ricardo Aguilar about an indigenous noble and patron of the arts from Michoacán, Mexico ("Don Antonio Huitzimengari: Información y Vida de un Noble Indígena en la Nueva España del siglo XVI").

Prior to joining the School of Art at Arizona State University, Professor Afanador-Pujol served as assistant professor of art history at the University of Minnesota (2008-2014); held an Andrew W. Mellon Foundation/ACLS Recent Doctoral Recipients Fellowship at the John Hope Franklin Humanities Institute, Duke University (2009-2010); and was a teaching fellow at the Department of Art History, University of California Los Angeles (U.C.L.A., 2005); an associate instructor, Department of the History of Art, U.C. Riverside (2002-2003); and adjunct faculty, at the School of Art, University of Arizona (2001).

She is also the recipient of several research grants, including an Andrew W. Mellon Foundation/ACLS Dissertation Completion Fellowship (2007-2008); and a UC MEXUS, Dissertation Research Grant (2005-2007).

​Among the courses she has taught are seminars such as (Mis)Representing Justice: Art, Law and Censorship; Art, Food, and Consumption; Art of the Native Peoples of Latin America: Spoken Word and Painted Texts; Colonial Cultures and Identities (co-taught). Her upper and lower division lectures range from Aztec Art and Empire; Art of the Inka and their Ancestors; and Word and Image/Science and Art in the Age of Trans-Atlantic Exploration (co-taught) to Arts of Africa, Oceania and the Americas; Mexico On My Mind; and Pre-Columbian Art I.

The Relación de Michoacán and the Politics of Representation in Colonial Mexico. Austin: University of Texas Press, July 2015.  https://utpress.utexas.edu/books/afanador-pujol-relacion-de-michoacan

“The Tree of Jesse and the ‘Relación de Michoacán’: Mimicry and Identity in Colonial Mexico.” The Art Bulletin, December 2010, 293-307.