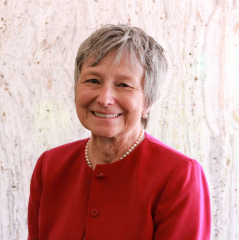 Katherine Krzys, archivist, actress, director, author, and theatre for youth historian, began her archival career during her first year of graduate school when she was assigned a research assistantship to transfer the finding aids for the recently established (1979) Child Drama Collection (CDC) from typewriter generated text to computers. At the time there were about 125 books and 100 linear feet of archival collections. Under Krzys’ 32-year curatorial leadership the CDC has grown to become the largest repository in the world documenting the international history of theatre for youth back to the 16th century.

Krzys was employed as the first paid employee of AATE (American Alliance of Theatre & Education) from 1990-1994, working half-time for AATE and the CDC during those years.  When her schedule allows, she  enjoys collaborating on new productions as an actress and director, and once directed a large musical, Jubilee 2000, that toured the Southwest, including a performance at the Anaheim Convention Center. Her awards include the AATE 1998 Barbara Salisbury Wills Alliance Award, the AATE 2007 Lin Wright Special Recognition Award, and twelve Presidential Citations from AATE, on whose board she has served for over 10 years as an ad hoc advisor. In addition, ASU Libraries received a CTFA Medallion in 1994 that recognized its contribution in creating the CDC. In August 2016 she received the Campton Bell Lifetime Achievement Award from AATE, and the Medallion of Honor from the Children's Theatre Foundation of America.

Krzys received her MFA in Theatre with Concentration in Theatre for Youth from Arizona State University (ASU) in 1988.

Krzys is committed to preserving the history of theatre for youth and theatre education. There are currently 138 different collectons in the CDC, which record the contributions of professional theatres for young audiences, foundations, youth theatres, playwrights, designers, university programs and professors, national organizations, and arts educators. For more information about the holdings, see the library guide on the ASU Libraries online catalogue.

Her publications include: a biography of Sara Spencer, one of the founders of the Children's Theatre Foundation of America and of the first publishing company specializing in plays for young audiences, published in Spotlight on the Child; assistant editor with Ann Shaw and lead Nat Eek of the three volume ASSITEJ (the international professional theatre for young audiences organization) history; indices to journals; and eulogies to leaders in the field. She is frequently invited to deliver keynote speeches at conferences and landmark celebrations and is working on creating online tutorials recording the history of the field.