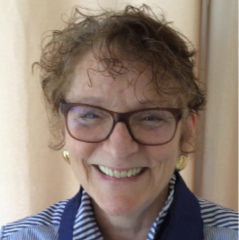 Julie F. Codell is professor of art history at Arizona State University. She was director of the School of Art, 1991-2001, and interim chair of Film and Media Studies a (2010-11). She is a faculty affiliate in English, Film and Media Studies, Asian Studies, the Center for the Study of Film, Media and Popular Culture, and Gender and Women's Studies. Her areas of specialization are Victorian culture, the Victorian press, Indian culture under the British Raj, life writings in Britain and India (autobiographies and biographies), Indian travel narratives, representations of race and gender, material culture, the art market, the history of collecting, and world film.

She has been invited to speak at museums and at universities and present keynote lectures at conferences in China, Australia, New Zealand, Britain, Canada, France, India, Italy, and in US at the Smithsonian Institution, Yale Univ., Univ. of Wisconsin-Madison, Univ. of Colorado, Univ. of Iowa, Emory Univ., University of Virginia, Univ. of Southern California, Univ. of California Davis, Univ. of Oregon, Univ. of California Los Angeles (UCLA), UC Berkeley, the Birmingham Museum in England, the Huntington Library.  She was an invited participant in an international research project, '"Internationalism and Cultural Exchange, 1870-1920," organized jointly by York University and the University of Bristol in the UK.

Her course topics include the art market; the history of art collecting; the Pre-Raphaelites in art and literature; British culture and empire; the self in Victorian culture (autobiography and portraiture); the portrait; gender, race and world cinema; artist biopic films; the body in 19th-c. art; and critical theory.  She served on dissertation and thesis committees at Oxford University, Yale University, The University of Sydney, The University of Ghent in Belgium, Queen's College, Ontario, Nehru University in Delhi, and several ASU departments—School of Art, English, History, Religious Studies.

She is currently serving a second three-year term on the Board of Directors of Arizona Humanities on which she chairs the grants committee and is a member of the executive committee and the development commmittee. She edits the blog for The International Art Market Studies Association and is on the editorial boards of Visual Resources; Visual Culture in Britain (UK); The Journal of Pre-Raphaelite Studies (which she edited for five years); and Victorian Periodicals Review. She regularly reads manuscripts and writes book reviews for these and other journals and academic presses. She has been president of the Victorian Interdisciplinary Studies Association of the Western U.S., the Research Society for Victorian Periodicals, and the Midwestern Victorian Studies Association, and an officer and board member of five professional organizations. She was chair of the College Art Association Mather Award Jury for two years and is currently a grant assessor for the Australian Research Council, for Trinity College's Dublin fellowship program, and for the National Humanities Center in Durham, North Carolina, and has served as grants evaluator for the National Endowment for the Humanities in Washington, D.C. She is also editor of the blog for the International Art Market Studies Association.

2018     Collaboration Grant, Herberger Institute for Design and the Arts, ASU

2016-17 Project Grant, Herberger Institute for Design and the Arts, ASU

1996     Arizona Commission on the Arts Grant for visit of Turkish artist B. Anilanmert

1989     NEH Stipend for Summer Institute on Theory & Interpretation in Visual Arts, U of Rochester

2020     “The Relativity of the Past:  Pre-Raphaelite New Histories of British Culture,” Representing the Past in the Art of the Long Nineteenth Century: Historicism, Postmodernism, and Internationalism. ed. Matthew Potter (London: Routledge), in press.

2020     Guest lecturer, Society for the History of Collecting, "Collecting as a Public Good," July 30, remote

2018     "Being a Radical Artist in Victorian England," Oklahoma Art Museum, Oklahoma City, November, in conjunction with exhibition "Victorian Radicals: The Pre-Raphaelites and the Arts and Crafts Movement"

2018      Invited lecture, "Collecting Degas in America," Denver Art Museum, March, in conjunction with the exhibition, "Degas: A Passion for Perfection"

2014     Plenary panelist, "The Ruins of Violence: The Aftermath of the 1857 Rebellion in the Photographs of Robert and Harriet Tytler," Midwest Victorian Studies Association, April

2013     Invited discussant, ASU Institute for Humanities Symposium on The Imaginary: The Senses and Memory

2010     Invited organizer/chair for panel on Future Directions for Assoc. of Historians of 19th-c. Art, Chicago, CAA

2009     Invited speaker for workshop The British in India: Art, Culture and Society, U of Wisconsin, Madison

2009     Invited to participate in Internationalism and Cultural Exchange, 1870-1920 workshop, Univ. of Bristol

1998     "Keats and the Pre-Raphaelites: Intertextual Transgressions," U of Colorado, Boulder

1990     "The Female Spectator and the Female Artist," Arizona State U

Association of the Western US, Reno, Oct

2020     "Toward a Historiography of Pre-Raphaelite (Post)Modernism and the Future of the Pre-Raphaelite Past," Modern Language Assoc. conference, Seattle

Victorian Interdisciplinary Studies of the Western US (VISAWUS), Seattle, Nov.

2019     "From Abjection to Icon: Artist Biopics and the Representation of Artists’ Historical Identities," Arts in Society International Conference, Lisbon, June

2018     “Back to the Pre-Raphaelite Future: Mutable Time, Directionless History and the End of Progress,” Victorian Interdisciplinary Studies of the Western US (VISAWUS), Palm Springs, Nov.

2017     "Folding the Canon: The Pre-Raphaelite List of Immortals and the Anti-Canon," for conference "Form and Reform," University of California, Santa Cruz, July

2016     "The Cultural Economy of Replicas: The Case of Rossetti," and organizer of two panels on Replicas and Replication in the Victorian Age, Victorians Institute STEAM conf, Raleigh, NC, Oct.

2015     "Self-Fashioning Orientalism as Identity and Transgression," Victorian Interdisciplinary St Assoc of the Western US, October, Denver

2014     Research Society for Victorian Periodicals, “The Aesthetic Ideology of Home and Heritage in The Magazine of Art,” Sept, Wilmington, DE

2012     International Conf. on Romanticism, "The Art of Landscape: Picturesque, Sublime and Oriental," Tempe,

2011     19th-C. Studies Association (NCSA), "The Transvaluation of Goods: Painting as a Site of Cultural and Economic Exchange," Albuquerque

2010     No. American Victorian St Conf, "The Overscaled in Victorian Painting: Haptic Space, Visual Caesura, and the Sensorium," and organized/chaired panel, "On Longing in Victorian Visuality," Montreal

2008     International Congress of the History of Art, "Imperial Exchanges of Goods and National Identities: Swadeshi and Indian Crafts under the Raj," Melbourne, Australia

2008     International Auto/Biography Assoc, "The Gender of Genius in Artists’ Biopics: Sex and the Studio," Honolulu

2008     Victorian Interdisciplinary St Assoc. of the Western US, "Market Cycles, Aesthetic Commodities and Heterotopias: The Politics of Tastemaking," Seattle

2007     Victorian Interdisciplinary St Assoc of the Western US, Chair of panel, "Recording Motion: Verbal and Visual  Representations of Travel," Boulder

2007     Society for Cinema and Media Studies, Organizer/chair, Workshop on Empire in Film, Chicago

2006     Association for Asian Studies, "Photographic Portraits of Maharajahs: Interventions and Identities" and Chair/Organizer of panel, "Photographs and Pageantry in Colonial India," San Francisco

2006     International Conference on Romanticism, "Victorian Picturesque: From Aesthetic to Morality in Mary Ward’s Marcella," and Chair/Organizer of panel, "The Persistence of the Romantic Aesthetic," Tempe

2005     Victorian Interdisciplinary St Assoc of the Western US (VISAWUS), "Ritualized Dress, Decorum and Politics in the Delhi Coronation Durbars" and Chair/Organizer, Panel, "Imperial Celebrations and Rituals in India,"   Albuquerque; also attended as board member

2004     Victorian Interdisciplinary Studies Association of the Western US (VISAWUS): Introduced plenary speaker and attended Executive Board meeting as board member

2001     Victorian Interdisciplinary St Assoc of Western US: "Exhibiting India for the Raj," UCLA

2000     Research Society for Victorian Periodicals: "The Empire Writes Back," London