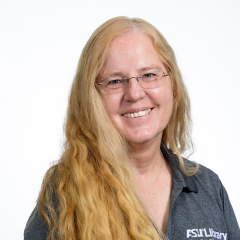 Libby grew up in West Virginia, went to college and got married in Illinois, then moved to Arizona as a new bride. Throughout her life, she has enjoyed the opportunities of being a Lifetime Girl Scout - making new friends while camping, backpacking, caving, canoeing, kayaking, singing around the campfire and in Girl Scout chorus, learning to play the guitar, writing songs with her friends, and a myriad of other great activities. Before marriage, summer vacations usually found her at camp as a camper, counselor-in-training, apprentice counselor, waterfront director, or swimming instructor. When her youngest child became a Daisy Girl Scout, Libby volunteered her services and become certified to teach troop camping skills so that she could train and accompany her daughter's troop on camp outs. She also became a volunteer for the Arizona Cactus-Pine Girl Scout Council where she helped create a backpacking certification course so that leaders could be trained and certified to lead their older girl troops into the wilderness and deserts with what they could carry on their backs, as well as a Camping Skills certification program for Girl Scout leaders and older Girl Scouts. She backpacked a portion of the Appalachian Trail at the age of 13 with her local Girl Scout camp's backpacking unit, and as an adult trekked in the Sangre de Cristo mountains (Philmont Scout Ranch in Cimmaron, New Mexico) twice with Explorer Post 127. Other certifications she has held include Basic First Aid, CPR, Water Safety Instructor, Wilderness First Aid, and Leave No Trace Instructor; and she earned her Wood Badge certification through Grand Canyon Council BSA. Before employment at ASU, Libby's work history also included baby-sitter, surveyor's helper, Carden preschool teacher, nursing home / retirement home cook, then housekeeper, and traveling portrait photographer for PhotoCorporation of America. She has worked at ASU Library since 1982.