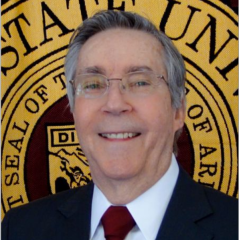 Dr. Lee McPheters is Research Professor of Economics in the W. P. Carey School of Business at Arizona State University and Director of the school’s JPMorgan Chase Economic Outlook Center. The Center maintains the Western Blue Chip Economic Forecast and Greater Phoenix Economic Forecast websites. Dr. McPheters also oversees the Job Growth USA website that tracks employment across states and metropolitan areas. The website is frequently used by economists, financial analysts, economic development specialists, and, during election season, fact-checking organizations to evaluate claims by candidates regarding job creation statistics and policies. His writings on the Western region have been quoted in the Wall Street Journal, USA Today, The Economist, Business Week, The New York Times, and Newsweek as well as major metropolitan area newspapers throughout the nation. He has appeared nationally on Good Morning America, Fox News, Marketplace on NPR, and CNN commenting on the economic outlook. As Director of the Economic Outlook Center, since 1987 Dr. McPheters has delivered a cumulative total of more than 500 speeches and presentations to various public and private audiences at business and academic conferences in Arizona and across the nation.

Dr. McPheters has published numerous articles in books and professional journals on various topics, including immigration, executive compensation, monetary policy, international business cycles, and issues in law and economics. At the federal level, his work has been supported by the United States departments of Justice, Transportation, Agriculture, and the Treasury. In Arizona, he has completed research projects for the Arizona Department of Transportation, Sky Harbor International Airport, Boeing, and many other public and corporate sponsors.  He has an extensive background in analysis of the economic impacts of airports, and has completed over 100 airport studies ranging from small general aviation facilities to major commercial service airports.

He has been named a Distinguished Faculty Researcher in the W.P. Carey School and received the school’s Faculty Service Award, presented annually to one recipient for innovative and effective service.

Dr. McPheters completed his undergraduate studies at San Francisco State University and received his Ph.D. in economics from Virginia Polytechnic Institute. He has been at ASU since 1976, teaching courses at the undergraduate and graduate level in monetary and regional economics. In addition, he has held various administrative positions at ASU including Senior Associate Dean for Graduate Programs in the W. P. Carey School of Business from 1991 – 2008.