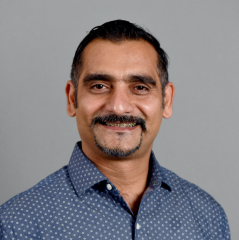 Anuj Mubayi is currently an assistant professor of applied mathematics in the School of Human Evolution and Social Change as well as in the Simon A. Levin Mathematical Computational Modeling Science Center at Arizona State University-Tempe. Mubayi is also a co-director of Mathematical Theoretical Biology Institute and director of the B.S. in Applied Mathematics in Life and Social Sciences undergraduate program. He also holds adjunct affliations at multiple institutions including the University of Texas at Arlington, Northeastern Illinois University at Chicago, the Prevention Research Center in Berkeley, the National Alliance for Doctoral Studies in the Mathematical Sciences, and the Barrett Honors College at Arizona State University. He received his doctorate from Arizona State University in 2008 and held a Gates Foundation’s and a National Institutes of Health’s fellowship at the Cleveland Clinic and the Case Western Reserve University School of Medicine, respectively.

His recent research includes development of novel mathematical modeling tools to understand transmission dyanmics and control of neglected tropical diseases such as Visceral Leishmaniasis and Chagas as well as to study issues in human social  interactions and contextual influences leading to complex societal problems.