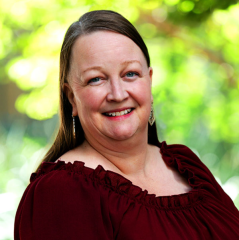 A professor at the College of Law since 2001, Tamara Herrera teaches a variety of courses, including Legal Writing and Method, Legal Advocacy, Writing for Law Practice, Indian Legal Research, and first-year Property. Her scholarly interests include legislative drafting and tribal law, as well as the intersection of legal writing and legal research.

Professor Herrera is a member of the Association of Legal Writing Directors and the Legal Writing Institute. From 2016-2020, she served as the Secretary of the Association of Legal Writing Directors. She is a past chair of the Environmental and Natural Resources Section of the Maricopa County Bar and a member of the State Bar of Arizona, the Federal District Court for the District of Arizona, and the United States Supreme Court. She writes a monthly column about legal writing for the Maricopa County Bar’s publication, Maricopa Lawyer. Following her graduation with distinction from the University of Nebraska School of Law, Professor Herrera practiced law at the firm of Ryley, Carlock & Applewhite in Phoenix. She performed complex legal research in water and Indian law; drafted proposed rules and legislation relating to natural resources issues in Arizona; and represented clients in both state and federal courts.

In addition to her law degree, Professor Herrera has a Masters Degree in Information and Library Science from the University of Arizona.