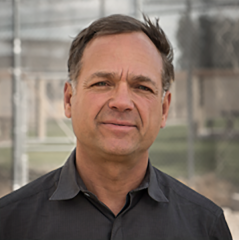 As a socially-engaged artist, Gregory Sale brings together often opposed constituencies of the criminal justice system. His aim is to soften and collapse boundaries, thereby encouraging reciprocal dialogue and mutual learning. A somewhat quieter but no less political component of his work flirts with the fluid parameters of public and private love.

It’s not just black and white (2011) at ASU Art Museum consciously wrestled with the visual motifs and clichés of crime (striped uniforms, chain gangs, pink underwear, and even brown skin) of Arizona Sheriff Joe Arpaio while considering cultural, social and personal issues at stake in the day-to-day workings of the criminal justice system. He has collaborated with men sentenced as juveniles to life without parole (Life is Life, 2011-12) and others on death row (Love for Love, 2013-14).

Sale is now collaborating with individuals who have conviction histories on a series of projects that focus on changing the narrative of reentry. Rap Sheet to Resume (2015-16) was created with the Urban Justice Center in New York. As an embedded artist with the Anti-Recidivism Coalition, and in partnership with National Parks Service and Golden Gate National Parks Conservancy, he is currently developing Future IDs at Alcatraz (2018-19) for the iconic prison turned National Park in San Francisco Bay.

Based in Phoenix and in Los Angeles, Sale is Associate Professor of Intermedia and Public Practice.