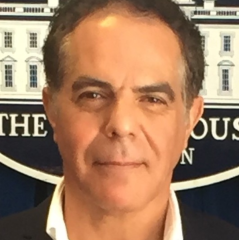 Dr. Chouki El Hamel is a Professor in the History Department (now School of Historical, Philosophical and Religious Studies) at Arizona State University, specializing in West and Northwest Africa.  His training and Ph.D. studies in France at the Centre de Recherches Africaines (University of Sorbonne, Paris I & VII) were in African History and Islamic Societies.  He taught courses in African History at North Carolina State University in Raleigh and at Duke University in Durham, N.C.  In 2002, he was a scholar in residence at the Schomburg Center for Research in Black Culture in New York City (NEH fellowship) and he was a Visiting Professor at Nice University, France in the spring of 2016.  In the academic year of 2016-17, he was awarded a Fulbright grant for research in Morocco.

His research interests focus on the spread and the growth of Islamic culture and the evolution of Islamic institutions in Africa.  He is particularly interested in the subaltern relationship of servile and marginalized communities to Islamic ruling institutions.  His research into these relationships revolves around issues of power/class, slavery, race/ethnicity, gender and social justice.  He published two major books and many scholarly articles in academic journals and popular magazines.  His most recent book is Black Morocco: a History of Slavery, Race, and Islam (Cambridge University Press, 2013), which has won Honorable Mention for the L. Carl Brown American Institute for Maghrib Studies Book Prize.  He is now working on a new book project entitled “The Hidden Story of Maroons in Morocco and the Epistemology of Silence.”

Over the past decade, as a Professor of History at ASU, he has actively participated in a wide variety of positions ranging from department committee work to the faculty senate. He has chaired or served as a member on a number of university committees, including, the University Promotion and Tenure Committee, History Personnel Committee, Library Liaison Committee and the Senate.  In these positions, he gained an understanding of the importance of leadership in collaborative work.  He has sought to improve the faculty’s voice in shared governance by fostering dialogue between academic schools and departments and by emphasizing the need for a shared responsibility in the effort to achieve academic and institutional excellence.  Moreover, as a faculty member and as a scholar he has actively supported interdisciplinary research by co-directing two research clusters under the auspices of the ASU Institute for Humanities Research from which he also received three seed grants.