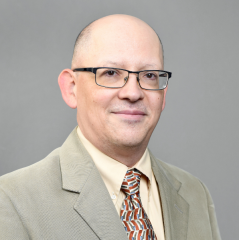 John Ericson, Professor of Music at Arizona State University, is one of the most visible horn players today with wide-ranging experience as an orchestral player, soloist, and teacher. Ericson began his professional career as Third Horn in the Nashville Symphony, where he served for six seasons. From there, he turned to teaching, first at the Crane School of Music (SUNY Potsdam) and next at Arizona State University, where he has taught since 2001.

With over 25 years of teaching experience, his students have won positions around the world teaching at the college level and performing in orchestras and military bands. Ericson holds degrees from Indiana University (where he served as teaching assistant to Michael Hatfield for three years), the Eastman School of Music (where he studied with Verne Reynolds), and Emporia State University, his hometown university. He has performed and taught on the summer faculties of the Interlochen Center for the Arts and the Brevard Music Center, and has served two terms on the advisory council of the International Horn Society. Currently, he is proud to serve as an ex officio board member of the Kendall Betts Horn Camp.

Ericson has also released three solo CDs on the Summit label which were received with critical acclaim. His first CD, Les Adeiux, was commended by The Horn Call for "fantastic playing.... The level of musicality, nuance and artistry is not to be missed." His second project, Canto, was hailed as a "terrific collaboration between horn and piano." Among many other orchestral, chamber music, and studio recording projects, Ericson also performed on the Grammy-nominated album Fourth World, of Native American flutist R. Carlos Nakai.

Co-founder of the online magazine Horn Matters, his publications are a reflection of his teaching, as well as his interest in problem-solving and improving the pedagogy of the horn. With his additional enthusiasm for all instruments of the middle brass and the history of the horn, Ericson has published print and online publications on topics as diverse as the mellophone and the Wagner tuba.

Ericson is a recipient of the Harold Meek Memorial Award and the Punto Award from the International Horn Society, and has performed and presented sessions at seven international horn symposiums and numerous regional events. A firm believer that everyone needs a hobby, Ericson recently published one of his lifelong projects, a book documenting the definitive history of American OO gauge model trains.

His initial research interests solidified through writing his dissertation (DM, Indiana) on the topic "The Development of Valved Horn Technique in Early Nineteenth-Century Germany: A Survey of Performers and Works Before 1850 With Respect to the use of Crooks, Right-Hand Technique, Transposition, and Valves."

This specialized examination of the history, repertiore, and pedagogy of the horn, combined with his minor in brass instrument design and construction, provided a solid "big picture" view of all things French horn and led initially to a number of articles in journals including The Horn Call and The Historic Brass Society Journal. He was awarded the 2000 Harold Meek Memorial Award by the International Horn Society for the article “Crooks and the 19th-Century Horn, ” publihsed in The Horn Call 30, no. 1 (November, 1999), 49-58.

Besides numerous performances, conference presentations, and recordings, Ericson has in recent years expanded the pedagogy of the horn through his innovative publications on topics as diverse as the natural horn, the triple horn, and the mellophone.

In recent years there have been two distinct areas of focus.

One area has been looking to older, often forgotten, pedagogical and musical sources for the French horn and revising them to fill gaps and improve on the efficiency of teaching a difficult instrument.

The other recent area of activity relates to promoting a physiologically accurate approach to horn playing, incorporating elements in particular from the recent (and ongoing) MRI horn studies.

Both of these relate to a larger focus on expanding the content and quality of what may be be found on the French horn online. This would include not only the development of the Horn Matters website (an online magazine and Open Educational Resource) but also the development of innovative E-publications and a video podcast series. The overall goals being to encourage, inspire, inform, and challenge horn players, and to promote the best musical instrument ever, the French horn.