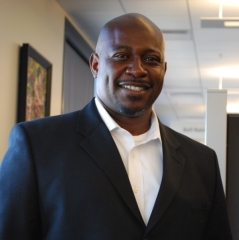 Austin is an Associate Professor in the School of Philosophical Historical and Religious Studies. He studies African American history with a focus on the Civil Rights and Black Power Movements. Named a Choice Outstanding Academic Title, his first book, Up Against the Wall, examines the history of the Black Panther Party. Austin recently completed a second book entitled “Dare to Struggle: A History of the Black Power Movement.” He is currently writing “Dare to Win: A History of the San Francisco 8.”  The SF8 were former members of the Black Panther Party arrested in 2007 for the 1971 homicide of a San Francisco police officer. Having jailed the men in 2005 for refusing to cooperate with a grand jury, state and federal authorities, in a coordinated nationwide effort in 2007, re-arrested the eight men and held them on bonds totaling more than thirteen million dollars. “Dare to Win” examines the motivations behind their arrests and the history of the men’s involvement in the Black Panther Party and its underground apparatus the Black Liberation Army. It also illuminates the years of community organizing by those who supported their efforts to remain free. In 2011, the SF8 won its legal battle when the courts dismissed all charges.

From 2017-2020, Austin served as Associate Professor of History and founding Director of the Black Studies Program at the University of Oregon. Previously (2000-2007), he had been Director of the Center for Oral History and Cultural Heritage at the University of Southern Mississippi and founding Director of USM’s Center for Black Studies (2007 to 2011). While serving as an associate professor in The Ohio State University’s Department of African and African American Studies, Austin won the Award for Outstanding Service In The Promotion of Social Responsibility and the C. Peter Magrath University Community Engagement Award.

A specialist in 20th Century U.S. History and the Black Freedom Struggle, Dr. Austin received his Ph.D from Mississippi State University. His research focuses on the activities of grassroots activists, the role of armed struggle in freedom movements, and proliferation of political prisoners in state and federal correctional facilities.

Up Against the Wall: Violence in the Making and Unmaking of the Black Panther Party,

forthcoming 2020). Manuscript submitted to publisher in June 2019. Books in Progress:

“The Valiant Soldier: A Biography of Clyde Kennard.” Kennard was a World War II and Korean War veteran who became the first African American to attempt to enroll at the University of Southern Mississippi. He was imprisoned for his activism and later died as a result of his imprisonment.

“Dare to Win: A History of the San Francisco 8.” The SF8 are former members of the Black Panther Party who were arrested in 2007 after being charged with the 1971 homicide of a San Francisco police officer. After being held on a combined $13 million in bail, serving nearly a year in the SF County jail, and working through four years of discovery motions, the trial court dismissed the charges against the men in 2011.

the Black Panthers to Stokely Carmichael, published by ABC-CLIO. 10 pages. (2018) Entry on the BLACK PANTHER PARTY in Black Power Encyclopedia: From the Black

Jestice, editor, Holy People of the World: A Cross-cultural Encyclopedia, 2004.

Review, Andrew Witt, The Black Panthers in the Midwest: The Community Programs and Services of the Black Panther Party in Milwaukee, 1966-1977, Journal of American History, September 2009, Vol. 96, issue #2.

Review, Simon Wendt, The Spirit and the Shotgun: Armed Resistance and the Struggle for Civil Rights, Journal of Southern History, 2008.

Review, Pure Fire: Self-Defense as Activism in the Civil Rights Era in Journal of Mississippi History, 2008.

Review, Frederick Wirt, “We Ain’t What We Was”: Civil Rights in the New South, in Journal of Mississippi History, 2000.

Review, Cynthia Griggs, Soon We Will Not Cry: The Liberation of Ruby Doris Smith Robinson, in Florida Historical Quarterly, Winter 1999.

Review, Robert C. Smith, Racism in the Post-Civil Rights Era: Now You See It, Now You Don’t, in Journal of Mississippi History, 1997.

Review, Gerald Smith, A Black Educator in the Segregated South: Kentucky’s Rufus B. Atwood, in Journal of Mississippi History, 1996.

DRUM Magazine, “50th Anniversary Commemoration of Freedom Summer,” July 2014
Script Writer, Producer, and Narrator of Clyde Kennard and the Integration of the University of

Southern Mississippi, a short documentary on the attempted integration of USM, Spring 2008.

Produced Mississippi Moments installments. These are four-minute radio clips that highlight various aspects of Mississippi history and are aired on MPR in conjunction with the USM Center for Oral History and Cultural Heritage, 2006-2008.

Situated in the burgeoning field of Civil Rights and Black Power Studies, Austin’s  research engages themes of structural causes and solutions to oppression and inequality. His first monograph, Up Against the Wall: Violence in the Making and Unmaking of the Black Panther Party, examines the history and significance of the Black Panther Party, one of the most well-known, yet least understood organizations of the Black Power era. Up Against the Wall, which won the Choice Library Journal’s Outstanding Academic Book Award, chronicles the role of violence in the creation, sustenance and destruction of the BPP. It demonstrates how the Party’s early emphasis on self-defense left it open to infiltration, mischaracterization, and devastation by local, state, and federal law enforcement agencies. It also highlights the internal tension between one faction that insisted on armed confrontation and another that believed community organizing and alliance building should be the Party’s primary strategy. Ultimately, this work shows that while the BPP successfully launched a grassroots-oriented pan-ethnic resistance movement, it failed to adapt to the changing times.

Most recently, Austin completed a manuscript entitled “Dare to Struggle: A History of the Black Power Movement,” to be published in 2021 by Rowman and Littlefield Press. “Dare to Struggle” highlights various manifestations of Black Power in the United States as well as the movement’s interactions with similar efforts in the Caribbean, Europe, the South Pacific, and Africa. It examines the impact of Black Power on politics, economics, academia, religion, art, culture, music, and sports. The book demonstrates that while Black Power significantly changed the way corporate America and government agencies engaged African Americans, the ideology’s most lasting contribution is the change it wrought in Black people’s self-perception and their collective view of the wider world, including an unspoken acceptance of the responsibility to contribute to the Black freedom struggle.

Austin’s newest research project chronicles the saga of the San Francisco 8, a group of former Black Panthers arrested in January 2007 on thirty-six-year-old homicide charges. Tentatively titled “Dare to Win: A History of the San Francisco 8,” this monograph will explore the reasons why these men were arrested for the 1971 killing of a San Francisco police officer, why the state of California spent millions of dollars prosecuting them, and why, after four years of discovery hearings, a California court dismissed all the charges. In addition to examining the reality of U.S.-based political prisoners, this book will examine the history of the eight men’s involvement in the Black freedom struggle and the four years of legal battles they endured before a San Francisco Superior Court judge dismissed the charges. This project is unique because no historian to date has written authoritatively regarding the Black Power Movement’s underground apparatus. Because of recently acquired access to the principals’ private archival collections and to nearly 300,000 pages of formerly classified government records, Austin’s work will enrich our understanding of the motivations and activities of not only government agents, but human rights activists who primarily operated “off the grid” and under the radar for years at a time. Furthermore, this work will explore questions of how and why federal agencies sought to validate their own roles in the success of the Civil Rights Movement while they simultaneously worked to determine “good” activists from “bad” ones in regards to the politics of race, violence and collective action. Ultimately, this study will shed light on the federal government’s attempts to shape contemporary views of the modern Civil Rights Movement while influencing how that movement impacts the present political landscape.

National Council for Black Studies Award for Outstanding Service In The Promotion of Social Responsibility in Africana Studies, 2011

Choice Outstanding Academic Book for Up Against the Wall: Violence in the Making and Unmaking of the Black Panther Party, (University of Arkansas Press, 2006)