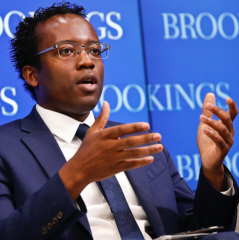 Professor Landry Signé is a world-renowned professor and leading practitioner who has won more than sixty prestigious awards and distinctions from four continents for his academic, policy, business, and leadership accomplishments, receiving as well the fastest reported tenure and promotion to the highest rank of full professor in the history of United States universities, for a scholar who started at an entry-level position in his discipline.

He is a Professor and Senior Director at the Thunderbird School of Global Management, where he co-founded and is leading the Fourth Industrial Revolution and Globalization 4.0 Center and co-leading the Washington DC Regional Center of Excellence. He is also a Senior Fellow in the Global Economy and Development Program at the Brookings Institution, Distinguished Fellow at Stanford University, Chairman of the Global Network for Africa’s Prosperity, Senior Adviser to top global leaders (presidential, ministerial, and C-suite levels) in business, policy, and international affairs. In addition, he has been on numerous boards and councils including for the World Economic Forum, the United Nations, Ampion Entrepreneurship and Innovation in Africa, and the African Union, was a Professor & Former Senior Adviser to the Chancellor and Provost on International Affairs at UAA, among others. Professor Signé was also a visiting scholar or has taught across the world, including at the universities of Oxford, Stanford, Georgetown, Montreal, Ottawa, Witwatersrand, as well as the Sub-Regional Institute of Statistics and Applied Economics in Central Africa, Mohamed VI Polytechnic University and HEC Paris School of Management.

Professor Landry Signé’s achievements have been recognized internationally with dozens of distinctions for his accomplishments as an extraordinary professor, prolific author and cutting-edge scholar, influential public intellectual, exemplary and dedicated academic leader, innovative entrepreneur, and sought-after strategic thinker, problem-solver, board member, and keynote speaker. He was selected as a World Economic Forum Young Global Leader for “finding innovative solutions to some of the world’s most pressing issues,” an Andrew Carnegie Fellow for being one of the “most creative thinkers,” a Desmond Tutu Fellow for driving “the transformation of Africa,” a Woodrow Wilson Public Policy Fellow for “preeminent scholarship uniting the world of ideas to the world of policy,” and one of JCI’s Ten Outstanding Young Persons in the World for “extraordinary achievements and dedication exemplifying the best attributes and leadership in academia,” and has won numerous academic awards, including the American Political Science Association Campus Teaching Award, the Chancellor’s Award for Excellence in Teaching, and the Chancellor’s Award for Excellence in Academic Research and Creative Activity.

As a pioneer in the Silicon Valley, he is the first to have taught at Stanford an award-winning course presenting Africa as a continent of economic opportunities (Emerging African Markets: Strategies, Investments and Government Affairs). He is the author of numerous scholarly publications, including books with leading academic presses such as Cambridge University Press (CUP), namely “Innovating Development Strategies in Africa: The Role of International, Regional and National Actors” (CUP 2017), “African Development, African Transformation: How Institutions Shape Development Strategy,” (CUP 2018), “Unlocking Africa’s Business Potential: Trends, Opportunities, Risks, and Strategies” (2020 with the Brookings Institution Press), and “Africa’s Role in the Fourth Industrial Revolution: Ridding the World’s Biggest Disruptive Innovation” (forthcoming). He is also the author or co-author of numerous Brookings reports such as  “Spotlighting Opportunities for Business in Africa and Strategies to Succeed in the World’s Next Big Growth Market,” “The Fourth Industrial Revolution and Digitization will Transform Africa into a Global Powerhouse,” “Leaving No Fragile State and No One Behind in a Prosperous World: A New Approach,” “The Potential of Manufacturing and Industrialization in Africa,” “Africa’s Tourism Potential,” “Africa’s Consumer Market Potential,” “Keys to success for the AfCFTA Negotiations,” “Illicit Financial Flows in Africa: Drivers, Destinations, and Policy Options,” “Why has Africa’s Fast Economic Growth Left More Poor People Behind and How Do We Fix It?,” “Accountable Leadership: The Key to Africa’s Successful Transformation,” among others. His work has also appeared in the New York Times, the Washington Post, Foreign Affairs, Foreign Policy, CNBC, Forbes, the Hill, and Harvard International Review, among others.

Professor Landry Signé was born in Cameroon, and grew up in Cameroon, France, and Canada, before coming to the United States. He also spent time in the United Kingdom, and has traveled all over the world, which led him to explore many of the most innovative and diverse countries on six continents. Professor Signé was educated in Cameroon (with honors and distinction; Vogt College), in France (valedictorian and salutatorian; University of Lyon 3, Sciences Po Paris, Sandar Institute), in Canada (received a series of awards and fellowships for the best doctoral performance; McGill University and University of Montreal), earned his PhD from the University of Montreal (awarded the Best International PhD Dissertation), and completed his postdoctoral studies at Stanford University (Banting fellowship for best and brightest researchers internationally). He has also completed executive business and leadership programs at the University of Oxford Saïd School of Business and Harvard Kennedy School. His adventurous life experiences have also transcended into his love for thrill-seeking hobbies from walking safaris with gorillas and cheetahs to skydiving, shark diving and more.