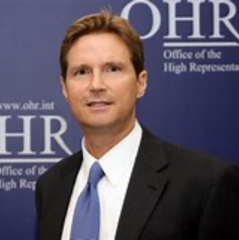 A retired U.S. Foreign Service Officer, Ambassador Moore has over three decades of experience as a diplomat, leader, manager, teacher, and consultant.   A part of the ASU community since January 2000, he has taught several unique courses on diplomacy - including POS 494 (Diplomacy in Action, the Embassy Country Team) and LAW 791 (Foreign Policy Design).

During his 31-year career (1987 – 2018) with the U.S. Department of State, Ambassador Moore played a key role in devising and implementing successful policies on behalf of the U.S. in post-conflict and transitional societies in Central and Eastern Europe (CEE).  This included fifteen years in senior executive positions at U.S. Embassies and multinational missions, where he managed several organizations with hundreds of employees, multi-million dollar budgets, and tens of millions of dollars in foreign aid programs.

In addition to serving as the first U.S. Ambassador to Montenegro, he served as Charge d’Affaires and Deputy Chief of Mission at U.S. embassies in Serbia and Bulgaria.  He worked in two international organizations in Bosnia and Herzegovina, including as the second-ranking official of the Office of the High Representative.   Ambassador Moore’s other diplomatic assignments include overseas postings in Croatia, North Macedonia, and Haiti.  He held several positions at State Department headquarters, including as Special Advisor on Anti-Corruption for the CEE region and as political-military officer for the CEE states following the collapse of the USSR.  He is the recipient of numerous State Department Superior and Meritorious Honor Awards, as well as of the Presidential Meritorious Service Award.  He has been decorated by the Montenegrin and Bulgarian governments.

During his State Department career, Moore taught at the graduate level for one year at the Fletcher School of Law and Diplomacy and for three years at the U.S. Naval War College.  Ambassador Moore has studied numerous languages, including several Slavic languages.  In addition to his academic work, he is active on various non-profit boards.    He grew up in East Greenwich, RI, and he currently lives with his family in Arlington, Virginia.

Ambassador Moore grew up in East Greenwich, RI.   He completed his undergraduate degree at Brown University with a dual concentration in Russian Studies and International Relations.  He also earned a Master’s degree at Brown in Slavic Linguistics.  He has been a member of the Phi Beta Kappa Society since 1985.