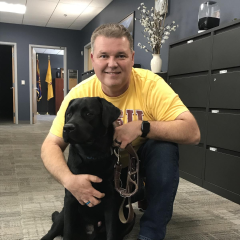 He is a graduate of the PERF SMIP (Police Executive Research Forum Senior Management Institute for Police) Program, AZPOST Leadership in Police Organizations, and has completed numerous law enforcement related training courses. He is also currently the immediate past president of the Board of Directors for Community Bridges Inc. (CBI) and Chair of the East Valley Chiefs of Police Association.

During his time as Chief ASU Police, the R.A.D. (Rape Aggression Defense) course was revived and expanded. Now, R.A.D. is offered to men and women, as well as an advanced R.A.D. course for women who have completed R.A.D. Basic.

In August of 2015, ASUPD and Police Chief Michael Thompson launched a Special Victims Unit. ASU is one of four universities in the nation with an SVU devoted to addressing sexual assault on campus.  Detectives assigned to the Special Victims Unit will investigate cases involving physical and sexual abuse, domestic violence, and crimes against children.