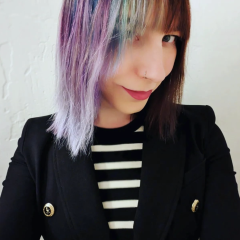 Max Bernstein was born in Buffalo, NY where they received a BA in Media Study with a concentration in film and video production, from the University at Buffalo. Bernstein also received an MFA in film production and studio art from the University of Colorado at Boulder. They have worked and toured as a technical artist with the Wooster Group, and as a video and sound designer with Michelle Ellsworth, Kaki King, Cindy Kleine, Aynsley Vandenbroucke, Sam Kim, Morgan Gould, Becca Blackwell, and Ondine Geary. In addition, they are one half of the piano harp duo Outlier, a founding member of media art performance group the Flinching Eye Collective, a video artist for Friends Of The Tank, drummer and video designer for the band Eupana, composer and sound engineer at Tribal Studio, a lifelong multi-instrumentalist, and a Scuba Diver. Their research and productions explore intersections of liveness and mediation, cinematic futures, queer futurism, anthropomorphization of the anthropocene, post-human philosophies and the body. Bernstein has also taught film history and production at the University of Colorado Boulder, and video art at the Rocky Mountain College of Art and Design. They are currently Assistant Clinical Professor jointly appointed in the Sidney Poitier New American Film School, and the School of Music Dance theater, as well as acting as associate director for the Geometric Media Lab in the School of Arts Media and Engineering in the Arizona State University Herberger Institute for Design and the Arts.