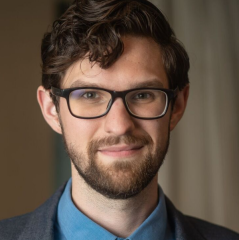 After growing up in New Castle, Pennsylvania, Aaron Kushner attended Saint Vincent College, graduating in 2013 with a major in politics, and earned his doctorate in political science at the University of Missouri in 2019.

His role within SCETL is Assistant Director of the Living Repository of the Arizona Constitution initiative.

His current book project is entitled Ruling or Being Ruled? The Development of Cherokee Political Thought.

“The Imposition of Freedom: Tribal Citizenship and the Case of the Cherokee Freedmen,” in
American Citizenship and Constitutionalism in Principle and Practice, Eds. Steven Pittz and
Joseph Postell (Manuscript Accepted at OU Press, Forthcoming)

"Removing 'by blood': Context and Politics in the Cherokee Supreme Court's Decision to Alter the Constitution"
Starting Points Journal (5, April, 2021)

"Who gets Cherokee citizenship has long been a struggle between the tribe and the US government"
The Conversation (25, March, 2021)