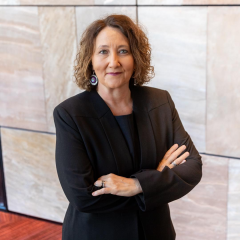 Stacy Leeds is an experienced leader in law, higher education, governance and economic development. She is the Foundation Professor of Law and Leadership at the Sandra Day O’Connor College of Law, Arizona State University.

Leeds is Dean Emeritus, University of Arkansas School of Law and the first Indigenous woman to lead a Law School. She also served as the inaugural Vice Chancellor for Economic Development at the University of Arkansas, leading the university’s mission to expand outreach, commercialization and entrepreneurial activities.

Leeds was the first woman to serve as a Justice on the Cherokee Nation Supreme Court. She is currently a Muscogee (Creek) Nation district court judge and an appellate court judge for Prairie Band Potawatomi Nation. She serves on the boards of Kituwah, LLC, American Indian Graduate Center, Akiptan, Inc. and the American Indian Resource Center, Inc.

Women and the Law Stories (Chapter 13:  A Tribal Court Domestic Violence Case: The Story of an Unknown Victim, an Unreported Decision, and an All Too Common Injustice)(Schneider & Wildman ed. 2011)

By Eminent Domain or Some Other Name: A Tribal Perspective on Taking Land (Tulsa Law Review 2005)

The Burning of Blackacre: A Step Toward Reclaiming Tribal Property Law (Kansas Journal of Law and Public Policy 2001)

Report of the Commission on Indian Trust Administration and Reform to the United States Department of Interior (submitted to the Secretary of Interior December 10, 2013)(commissioner and co-author)

Howard M. and Susan Immel Award for Teaching Excellence at University of Kansas, 2005