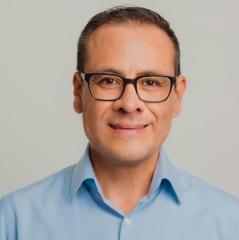 Julio Cisneros is an award-winning journalist with more than 20 years of experience as a reporter, editor and director for Spanish-language media outlets in the U.S.

The five-time Emmy Award winner spent eight years with Telemundo Arizona in various roles, including news director, web editor and reporter. He has served as a coach and trainer at Telemundo, working with staff members on the development and production of multimedia stories.

He previously was director of digital production for Entravision Communications in Phoenix, where he developed and managed video content and produced news stories for on-air and digital platforms.

He also spent 13 years at KUVR (later KREN) Univision in Reno, Nevada, where he helped launch Noticias Univision Reno, Reno’s first Spanish-language newscast. While there, he anchored the 6 p.m. and 11 p.m. news and reported regional stories for a national news magazine program. He was named Journalist of the Year in Nevada by the U.S. Small Business Administration in 2003.

Early in his career, Cisneros earned a certification as an elementary school teacher in Jalapa, Guatemala, before going on to earn a bachelor’s degree in communications science from the Universidad San Carlos in Guatemala.

He is the author of a memoir and a novel, both in Spanish.

As one of two Robert Wood Johnson Foundation Professors of Practice in Health News, Cisneros works with a team of students in Cronkite News to produce multimedia packages on health news and issues that impact Latino, Native American and borderlands communities. Content is published in English and Spanish through partnerships with professional media outlets and on Cronkite News, the student-staffed, faculty-led news division of Arizona PBS.