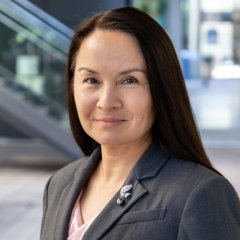 Ann Ching joined the law faculty in 2019. Professor Ching's legal career began in the U.S. Army, where she served as an Army lawyer and achieved the rank of Major. Her military awards include the Bronze Star for combat service in Iraq and the Humanitarian Assistance Award for disaster relief operations in Japan. Following her Army career, Professor Ching was an Assistant Professor of Law at Pepperdine University (2013-2015) and Ethics Counsel for the State Bar of Arizona (2016-2019). In October 2020, Professor Ching was appointed to serve as a judge pro tempore for the East Valley Regional Veterans Court, a treatment court that covers seven jurisdictions in the greater Phoenix area.

Professor Ching’s volunteer activities include serving as a pro bono appellate lawyer for veterans and as an ombudsman for Employer Support of the Guard and Reserve (ESGR). Professor Ching also serves on the Arizona Supreme Court Attorney Ethics Advisory Committee, the State Bar of Arizona Ethics Advisory Group, and as a faculty member for the State Bar of Arizona mandatory professionalism course.

LL.M., The Judge Advocate General's School of the Army