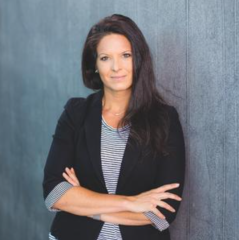 Anette Beebe is an Internet and Small Business attorney based out of Phoenix, Arizona and joined Sandra Day O’Connor College of Law, as a Professor of Law (Adjunct) in August of 2021. She’s been in the legal field since March of 1999 in various capacities including nine years working for an online consumer complaint forum heading up their legal department as In-House Counsel, later being promoted to General Counsel before departing in February of 2021. Anette has also operated her own solo practice, Beebe Law, PLLC, since 2012 to help small businesses and individuals with Internet law related matters. In April, 2019 Anette was involved with efforts to maintain the Texas Citizens Participation Act (the Texas anti-SLAPP law), testifying before the Judiciary and Civil Jurisprudence committee on HB2730, and subsequently had a hand in the redraft of the modified law. Her teaching, at ASU and elsewhere (including via her business Smarter Internet Use) focuses on Internet, IP, data privacy and advertising law topics and she periodically blogs on these topics. Further, Anette regularly speaks on internet law related topics and has been interviewed, in her different capacities, by various mainstream news publications including Fox 11 Los Angeles, ABC Action 15 Tampa, Bloomberg, Daily Herald, Forbes, New York Post, Search Engine Land, The Boston Globe, The Capital Forum, and The New York Times. Anette serves as a Co-Chair of the Digital Communications Committee within the American Bar Association's Forum on Communications Law and as a Member-at-Large for the Executive Council for the Business Law Section of the Arizona State Bar Association. Additionally, Anette is a member of: the Internet Lawyers Leadership Summit group; First Amendment Coalition; International Association of Privacy Professionals (IAPP); ChIPs which is an organization connecting women in technology, law and policy; and a member of the Internet Society. Anette received her AA, with honors, and Phi Theta Kappa, from Northland Pioneer College in 2001; received her BS, magna cum laude, and Phi Theta Kappa, in Administration of Justice, with a minor in Pre-Law, from Arizona State University in 2003; and received her JD from the University of Wyoming in 2011, where she was a member in, and officer for, the Intellectual Property Law Club and Phi Alpha Delta Law Fraternity.