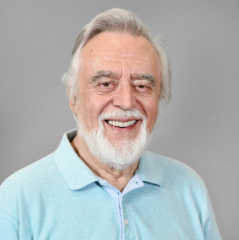 Dimitri P. Bertsekas was awarded the INFORMS 1997 Prize for Research Excellence in the Interface Between Operations Research and Computer Science for his book "Neuro-Dynamic Programming", the 2000 Greek National Award for Operations Research, the 2001 ACC John R. Ragazzini Education Award, the 2009 INFORMS Expository Writing Award, the 2014 ACC Richard E. Bellman Control Heritage Award for "contributions to the foundations of deterministic and stochastic optimization-based methods in systems and control," the 2014 Khachiyan Prize for Life-Time Accomplishments in Optimization, and the SIAM/MOS 2015 George B. Dantzig Prize. In 2018, he was awarded, jointly with his coauthor John Tsitsiklis, the INFORMS John von Neumann Theory Prize, for the contributions of the research monographs "Parallel and Distributed Computation" and "Neuro-Dynamic Programming". In 2001, he was elected to the United States National Academy of Engineering for "pioneering contributions to fundamental research, practice and education of optimization/control theory, and especially its application to data communication networks."

Bertsekas has held faculty positions with the Engineering-Economic Systems Dept., Stanford University (1971-1974) and the Electrical Engineering Dept. of the University of Illinois, Urbana (1974-1979). Since 1979 he has been at the Electrical Engineering and Computer Science Department of the Massachusetts Institute of Technology (M.I.T.), where he is currently McAfee Professor of Engineering. In 2019, he was also appointed Fulton Chair of Computational Decision Making at the School of  Computing and Augmented Intelligence at Arizona State University, Tempe, while maintaining a research position at MIT. His research spans several fields, including optimization, control, large-scale computation, and data communication networks, and is closely tied to his teaching and book authoring activities. He has written numerous research papers, and seventeen books and research monographs, several of which are used as textbooks in MIT classes.