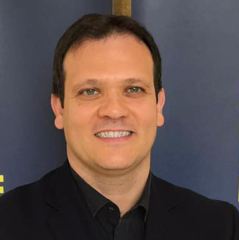 Dr. Mark Esposito is recognized internationally as a top global thought leader in matters relating to The Fourth Industrial Revolution, the changes and opportunities that technology will bring to a variety of industries. He is Co-Founder and Chief Learning Officer at Nexus FrontierTech, an AI scale-up venture. He was inducted in 2016 in the radar of Thinkers50 as one of the 30 most prominent rising business thinkers in the world. He is a global expert of the World Economic Forum and advisor to national governments.

Besides being a Professor at Thunderbird/ASU, Mark has been a Professor of Business & Economics at Hult International Business School, globally. He co-directs the Fourth Industrial Revolution and Globalization 4.0 Initiative at Arizona State University's Thunderbird since its inception. Since 2019, he is has been inducted by MIT Technology Review into the list of the top 100 Global Tech influencers as well as Top 50 most influential thinkers in AI by Thinkers360.

He served as Institutes Council Co-Leader and Affiliate Faculty at the Microeconomics of Competitiveness program (MOC) at the Institute of Strategy and Competitiveness, at Harvard Business School under the mentorship of Professor Michael E. Porter until 2019 and he oversaw the management of several affiliated research centers which are actively involved with cluster theory research and practice. During his tenure at the Institute, Mark has overseen several research initiatives from the affiliate centers and curated the first Institutes Council Guide for new inductees, ever produced by the Institute.

He is a nonresident Fellow at the Mohammed Bin Rashid School of Government in Dubai as well as Research Associate for the University College London, Blockchain Technologies. In 2021 he was appointed as Policy Fellow at the renowned Institute for Innovation and Public Policy at UCL, led by world acclaimed economist, Mariana Mazzucato. He is equally an appointed Senior Fellow at the Global Federation of Competitiveness Councils in Washington DC as well as a Fellow of the Social Progress Imperative, always in DC. He sits on the boards of competitiveness national institutes in India, Italy and the Netherlands. In 2021 he was named Faculty Fellow for the Center for Law, Science and Innovation at Sandra O' Connor College of Law, at ASU.

He is involved as Senior Advisor at Cambrian Futures a global advisory deep tech thinktank. Since 2020, he is a Subject Matter Expert for the National Program on Artificial Intelligence  as well as Expert on Global Risks for the Centennial Lab at the Prime Minister Office of the UAE. He is fluent in 6 languages and in his non academic life, he holds the rank of Master Instructor, Black Belt IV Dan, at the International Budo Institute in Canada.

Dr. Esposito's research focuses on the interlink between policy, business and technology and he researches the impact that the transformation of the 4IR technologies will bring to an array of industries. He writes both professional press and academic pieces on the future, foresights and systems analysis and he has been investigating socio-economic complexity since his time at Michael Porter's Institute for Strategy and Competitiveness at HBS when he served as Institutes Council Co-Leader. Dr. Esposito is a prolific author with 150 peer and non peer reviewed articles, 11 edited and authored books, several chapters, and over 40 case studies, mainly on clusters and clusters theory. He has participated to 6 reports for the World Economic Forum and he is an active contributor to places like Project Syndicate and Harvard Business Review. His work on the Circular Economy is highly cited and made it to the list of the most cited articles in the field, for his publication on Thunderbird International Business Review as well California Management Review.

Education:
Videos
Google Talk on The AI Republic : Dr. Esposito shares with us his view on the fourth industrial revolution mainly artificial intelligence and its societal implications.
Publications: