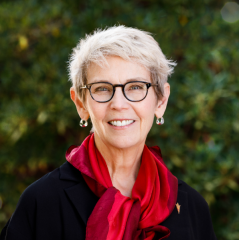 Cynthia Sagers joined Arizona State University’s Office of Knowledge Enterprise Development as the vice president of research. Sagers is responsible for research development activities; growing the university’s proposals, awards and expenditures; and overseeing specialized research development projects. Sagers previously was vice president for research at Oregon State University, and associate VPR at University of Arkansas. She also served as a senior research associate with the U.S. Environmental Protection Agency and as program officer for the National Science Foundation’s Office of International Science and Engineering and Division of Environmental Biology. She earned two bachelor’s degrees in biological sciences from the University of Iowa and a doctorate from the University of Utah in ecology and evolutionary biology. In addition to her work in ASU’s KED, Sagers also will be a professor in ASU’s College of Integrative Sciences and Arts.