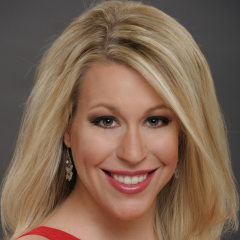 An active performer of opera, musical theatre, oratorio and concert work, her repertoire displays her versatility in a range of comic and dramatic roles. She has especially enjoyed the comedic characters of Norina (Don Pasquale) and Zerbinetta (Ariadne auf Naxos), as well as both soprano roles in The Impresario (Mademoiselle Silberklang and Madame Goldentrille). Other favorite roles include The Queen of the Night (Die Zauberflöte), the title role in The Merry Widow, Mabel in The Pirates of Penzance, Belinda in Dido and Aeneas, and Lucy Brown in The Threepenny Opera.  Favorite concert work includes the soprano solos in Poulenc’s Gloria, Orff’s Carmina Burana, and Handel’s Messiah, as well as the role of First Fairy in Mendelssohn’s A Midsummer Night’s Dream.

Equally at home in musical theatre, her favorite roles include Marian in The Music Man (for which she received an ariZoni award nomination for Best Actress in a Musical), Sister Sophia (Sound of Music) and Mrs. Mops (Menken’s A Christmas Carol). Recent engagements include the concert “An Afternoon with Kern and Hammerstein”, performing selections from Show Boat and other musicals, as well as the concert “Masterworks,” featuring the music of Leonard Bernstein. She has also performed in Arizona tours of “Broadway Classics”, “Sounds of Christmas”, “Broadway Showstoppers”, and “A Hometown Christmas” with Showtune Productions.

Her doctoral research was based in vocal pedagogy as it pertains to the female singer. Her dissertation, Pregnancy and Postpartum: A Guide for Singers, combined information from the fields of physical therapy, medicine, and surgery into a guide for the singer and voice teacher.  She appears often as a voice teacher and guest speaker throughout Arizona.

Dr. Will joined the voice faculty of Arizona State in 2016, after previously serving as a Faculty Associate and Teaching Assistant for six years.  She is a member of the National Association of Teachers of Singing (NATS), and currently serves on the Nominating Committee of the Valley of the Sun Chapter, after previously holding the positions of Vice President of Programs, Vice President of Membership, and Secretary.