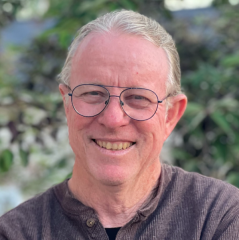 Dubbed a ‘gadfly of invasion biology’ by Scientific American, Matt Chew is known for critiquing ecology’s overreliance on societal metaphors and conservationists’ misapplication of notions like ‘nativeness’. A creature of the American southwest, Dr. Chew was raised in Arizona, earned two natural resources degrees at Colorado State University, then returned to Phoenix to consult for the Defense Department, Bureau of Indian Affairs and other government clients. As statewide Natural Resources Planner for Arizona State Parks, he coordinated their Natural Areas Program, researched wildlife issues, and served on interagency committees—one of which also included his future wife, plant ecologist Julie Stromberg. With her encouragement, he abandoned government work to earn a biology Ph.D. based entirely on historical research.

Remaining at Arizona State University, Dr. Chew conducts a field course in ‘novel ecosystems,’ lectures in ‘history of biology’ and ‘biology and society’, and works with postgraduate students. He was awarded an Oxford research fellowship in 2014. His articles in "Nature," "Science" and niche publications in history and conservation have been cited in over 200 different journals. Drs. Chew and Stromberg live in a historic farmhouse on irrigated land, where they rescue dogs, garden to attract wildlife and buy more books than they can read.

History and philosophy of Ecology and Conservation Biology

Metaphors, analogies and proxies in Ecology and Conservation Biology

Anekeitaxonomy (categories of nativeness) and other normative accessory classifications

Center for Biology and Society

Chew, M.K. [in press] Indigene vs. Alien in the Arab Spring: Viewing social revolution through the polarized lens of invasion biology. in U. Rabi and A. Bouasria, eds. Lost in Translation: Forgotten Paradigms of the Arab Spring. Eastbourne: Sussex Academic Press.

Chew, M.K. 2000. Essay/Op Ed: ‘A Theme Park Grows Beneath the Ground’ Boston Globe, 6 Feb 2000. (Also published as “When is a Cave Not a Cave?” Australasian Journal of Cave and Karst Management.)

Invasive Species are Neither, and Why it Matters. Maricopa Audubon Society, November 3, 2015; also at Boyce Thompson Southwest Arboretum, December 14, 2015.

Presentation: Phytogeography: 175 Years of Negative Nativeness. From Linnaeus to the Encyclopedia of Life: Tracking Diversity in the Natural World. MBL-ASU History of Biology Summer Seminar. Woods Hole, MA May 2010.

Biological Invasions as Ecological (and other) Models (with M.D. Laubichler) Southwest Colloquium in the History and Philosophy of the Life Sciences, Austin, TX March 2004.

The Tangled Tale of Tamarix: A Study in Status, Southwest Colloquium in the History and Philosophy of the Life Sciences, Tempe, AZ February 2003.