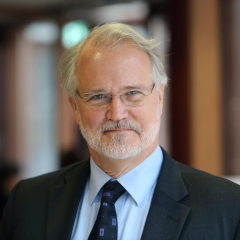 Prior to coming to Arizona State University, Calhoun served as director and president of the London School of Economics and Political Science (LSE). He was previously president of the Social Science Research Council (SSRC), dean of the Graduate School and director of the University Center for International Studies at University of North Carolina at Chapel Hill (UNC), and founder and director of the Institute for Public Knowledge at New York University (NYU). In addition to UNC and NYU, he has been a professor at Columbia University and the University of Oslo and a visiting professor at several international universities.

Calhoun’s work at ASU focuses on strengthening the ability of the social sciences, working together with the natural sciences, engineering and humanities, to address the most complex challenges facing society today—from crises in democracy to the shifting nature of globalization and the future of place-based communities, the complicated social and ethical issues raised by new technologies, and the need for creativity, solidarity, and determination in order to achieve just and sustainable futures.

He is the author or coauthor of 9 books, editor of another 22, and has published more than 70 journal articles and 100 book chapters that address culture, social movements, education, communication, religion, nationalism, the impact of technology, capitalism and globalization, critical theory and philosophy, and contemporary and historical empirical research. His work has been widely reprinted in anthologies and translated into 21 languages.

Calhoun serves on the board of the Mastercard Foundation and co-chairs the board of the American Assembly. He has been elected a fellow of the British Academy, the American Association for Advancement of Science, and the American Philosophical Society, a member of the Council on Foreign Relations, an Einstein Fellow by the City of Berlin, and president of the International Institute of Sociology. He has also served as president of the Berggruen Institute and holds honorary appointments as Centennial Professor at LSE and professor at the College d’Etudes Mondiales of the Maison des Sciences de l’Homme in Paris.

Calhoun received his D.Phil. from Oxford University, combining politics, sociology, and history. He has previous degrees in anthropology from Manchester, Columbia and University of Southern California.

Calhoun is currently completing two books: on the deterioration and renewal of social bases for democracy, and on the tension between cosmopolitanism and nationalism and other forms of more local solidarity. He is also in the earlier stages of projects on the politics of new technologies, the ways infrastructures shape society, and transformations of the university and related knowledge institutions. Among his publications are:

Craig Calhoun currently works informally with a number of students and will begin teaching formal classes at ASU in the 2019-20 academic year. He was previously honored for his teaching at UNC, NYU, and Columbia. He has also supervised the PhDs of 40 students now on the faculties of Amsterdam, Brown, CEU, Columbia, LSE, New Mexico, Northwestern, UCLA, Washington and other universities.

Member of the Council of St. Paul’s Institute, 2015-present