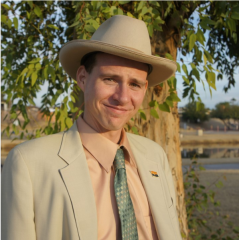 After growing up in Phoenix, Arizona, Sean Beienburg attended Pomona College in Claremont, California, graduating in 2008 with majors in politics and history, and completed his doctorate at Princeton University in New Jersey in 2015. Before coming to ASU, he taught at Haverford College and Lehigh University in Pennsylvania.

He is the author of Prohibition, the Constitution, and States' Rights  (published by the University of Chicago Press, 2019) and is finishing another book on states as constitutional interpreters and progressive federalists in the progressive and New Deal eras.

He is the project director of the Living Repository of the Arizona Constitution initiative.

In addition to his scholarly work, he also written about the political themes of Christopher Nolan's Dark Knight trilogy.

Prohibition, the Constitution, and States' Rights (University of Chicago Press, 2019)

"Progressivism and States' Rights: Constitutional Dialogue between the States and Federal Courts on Minimum Wages and Liberty of Contract." American Political Thought 8 (2019): 25-53.

"Neither Nullification nor Nationalism: The Battle for the States' Rights Middle Ground During Prohibition." American Political Thought 7 (2018): 271-303.

"The People Against Themselves: Rethinking Popular Constitutionalism," Law and Social Inquiry (2016):242-66. (with Paul Frymer)

"A Pilgrimage to the Disneyland of Faith," PS: Political Science and Politics  (2010): 359-61. (with Justin Crowe and Susan McWilliams)

“Originalists Were Always for (Some) Judicial Engagement,” Law and Liberty (January 2020)

“Prohibition and the Constitution’s Limits” Law and Liberty (October 2019)

"Prohibition, then and now," US News and World Report (December 2016)

"Reflections on the Revolution in Gotham: Of Burke and Batman," Pop Matters (2012)