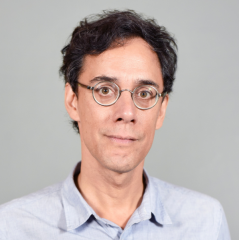 Christopher D. Johnson's teaching and research interests range widely, but mainly focus on the literatures and cultures of early modern Spain, Germany, England, and the Americas. Central to his scholarship and teaching are the theories and practices of comparative literature, including translation studies and comparative arts. He previously taught at Harvard University, University of California Los Angeles, Northwestern University, and was a research associate at the Warburg Institute, London. Author of "Memory, Metaphor, and Aby Warburg’s Atlas of Images" (2012) and "Hyperboles: The Rhetoric of Excess in Baroque Literature and Thought" (2010), he also translated and edited "Selected Poetry of Francisco de Quevedo" (2009). In 2015, he was a fellow at the American Academy in Berlin. Currently, he is working on a book for Princeton University Press, whose working title is "Baroque Expression: On Seventeenth-Century Literature, Art, and Thought."

Hyperboles: The Rhetoric of Excess in Baroque Literature and Thought (2010),