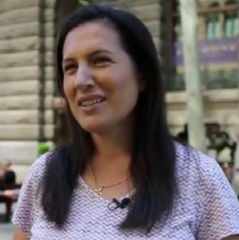 Katina Michael is a professor in the School for the Future of Innovation in Society and School of Computing and Augmented Intelligence at Arizona State University.

Previously Michael was associate dean international at the University of Wollongong (UOW), Australia, where she was employed in the School of Computing and Information Technology since 2002. She has held visiting academic appointments at Nanjing University (China) and the University of Southampton (U.K.) and has taught at the Singapore Institute of Management, as well as overseeing UOW engineering and information science courses in eight campuses in five countries.

She was previously employed as a senior network engineer at Nortel Networks (1996–2001). She has also worked as a systems analyst at Andersen Consulting (1996) and OTIS Elevator Company (1994).

She researches predominantly in the area of emerging technologies, and has secondary interests in technologies used for national security and their corresponding social implications.

Katina has been the guest editor of fourteen special issues including the Proceedings of the IEEE, Computer, IEEE Robotics & Automation Magazine, IEEE Potentials, Journal of Location-Based Services, Computer Communications, Electronic Commerce Research, and Prometheus. She was the editor-in-chief of the IEEE Technology and Society Magazine (2012-2017), and has been senior editor for IEEE Consumer Electronics Magazine since 2015.

In 2017, Michael was awarded the Brian M. O’Connell Distinguished Service Award from the Society for the Social Implications of Technology. She is the founding editor-in-chief of the IEEE Transactions on Technology and Society, which will be launched in 2020.

This image depicts the potential for a transhuman existence, and is symbolic of digital watching. Will we continue to enhance our human functions? In this instance possibly by wearing an electronic contact lens to watch the internet and surveil with one eye, and see the natural world with the other eye?

Why is it when we require technology, it is not there for us; and why is it when we don't have a need for it, it is glaring at us in the face? I am all for Internet of Things-like devices for the disabled, for example for voice-activated environments, but I am more circumspect about the use value of IOT in everyday life.

I asked 100 people what they thought the unintended consequence of technology were- one participant said "racism". She was a nurse by training working in the Northern Territory of Australia. Others said: "big brother world", "disconnected lives", "violence", "zombie", "pollution", "death"...

Innovative Automatic and Location-Based Services: from Bar Codes to Chip Implants was published in 2009. The book introduces new concepts into the literature including homo electricus, electrophorus, and uberveillance and showcases biometrics and implants among other technologies.

Are we being enslaved by technology?

Are we being enslaved by technology? This IQ2 debate incisevely explored the pros and cons of technology in everyday life. The Australian audience was split almost 50 | 50 at a packed house at the City Recital Hall in Sydney. What do you believe?

Are we destined to a life of upgrades? Is the human body, bit by bit to be replaced with mechanical parts? Are we headed toward a cyborgian future without brakes? Are we committed to the transhumanist myth as a path to immortality?

What are the social implications of microchipping people? This TEDx talk based on first person interviews provides three scenarios touching on the hopes, the hype and the negative impacts of implantable technologies. Act 1: the kid. Act 2: the entrepreneur. Act 3: the mentally ill patient.

Dangerous Ideas at the Opera House

The Apple v FBI case caused a great deal of controversy. It signified the end of Apple's so-called impenetrable encryption on its proprietary iOS. What really happened behind the scenes? Did the FBI go too far in purportedly asking Cellebrite to hack into the Apple iPhone? What about citizen rights?

Is there such a thing as smartphone addiction? While the South Koreans have developed a "proneness" to smartphone addiction scale, the Norwegians have defined a Facebook Addiction Scale. What are the symptoms and how do we know if someone is suffering from screen overload? Can we self-regulate our practices?

The Facebook-Cambridge Analytica scandal was a tipping point for consumers across the world. What went wrong? What is the price of privacy and security? Should third parties have access to personal information? Can blockchain overcome data harvesting? How? And what about consumer trust in our largest ICT corporations?

The Internet of Us entails a narrative that places every living and non-living thing in a network. The end-user has long been held as the most important node in an architectural design. So where are we headed in this Fourth Age? Future humancentric implantable devices to provide an uberveillant context?

Michael is a professor in the School for the Future of Innovation in Society and the School of Computing, Informatics & Decision Systems Engineering. She studies the ethical, legal and social implications of emerging technologies, with a focus on implantable devices for medical and non-medical applications. The recipient of the Brian M. O’Connell Distinguished Service Award for the Institute of Electrical and Electronics Engineers' Society on the Social Implications of Technology, she's editing a special issue on "Machine Ethics: The Design and Governance of Ethical AI and Autonomous Systems" for Proceedings of the IEEE. She is the inaugural editor-in-chief of the IEEE Transactions on Technology and Society. Her research interests include:

Katina is the Director of the forthcoming Centre for Engineering, Policy and Society in the proposed Institute for the Future of Innovation in Society. The core team includes:

At the University of Wollongong

In Session 1 (Spring) of 2019 I will be teaching Welcome to the Future in the School for the Future of Innovation in Society.

In Session 2 (Fall) of 2019 I will be teaching a new course (TBA) in the School of Computing, Informatics & Decisions Science Engineering.

Previously at the University of Wollongong

Between 2001 and 2017 I taught predominantly at the University of Wollongong’s main campus. I have also taught at UOW’s Innovation Campus, Sydney Business School, and in Singapore to multiple partners. I have also given guest lectures at UOW Dubai, UOW Hong Kong, and INTI Laureate Malaysia to our international students. I have coordinated, lectured and tutored into several programs:

At different times during my career at the University of Wollongong, I have been the Academic Program Director for:

Degree and Course Areas Taught at UOW and UOW Partners

Completion of Introduction to Tertiary Teaching (ITT) Units 1 and 2 (2002-2003) and Unit 3 (2007) receiving a teaching scholarship on the theme of total curriculum management and distributive leadership.

Invited Talks to Industry and Government

Governance Positions at the University of Wollongong

Other Governance Positions at the University of Wollongong

I was involved in approximately 100 business and network planning studies across Asia and North America.