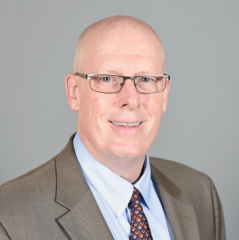 Born in the northern outskirts of Boston, Ross Emmett grew up in Norfolk, VA, attending Norfolk Christian Schools from K-12 (his parents were teachers at NCS). During his senior year of high school, he was invited to take courses at Old Dominion University, and subsequently simply continued the rest of his undergraduate study there. Emmett graduated in 1978 with a degree in history. He also studied linguistics, and intended to pursue a doctorate in the subject at the University of Michigan. But during the spring semester of his senior year, he realized that his real interests lay elsewhere, so he declined the offer of admission at UM. He spent a gap year working, and decided to pursue an IMBA at the University of South Carolina. During the IMBA program, Emmett did a 6-month internship at IBM Deutschland (outside Stuttgart) and also spent many evenings translating for myself Deitriech Bonhoeffer's "Gemainsames Leben" (Life Together). He had been considering the business degree as a way into international development organizations, but by the time he finished, he had decided his long-term goal was the become a professor of economics at a liberal arts college.

Happenstance led Emmett to apply for just such a job right after the completion of his IMBA. Trinity Western College (now university) was looking to add to their business program, and had not been able to find anyone in Canada. He decided to apply because TWC was in the Northwest, and because it fit his long-term goal. Joining TWC for three years convinced him (and others) that the professorial life was for me and provided my family with permanent resident status in Canada. In 1984, I became a graduate student in economics at the University of Manitoba, where he worked with Anthony Waterman on economics and Christian theology. While Waterman focused on classical economics and Christian political economy, he turned to American thought on the topic, and decided to focus on the work of Frank H. Knight, professor of economics at the University of Chicago from 1928 until his death in 1972. Emmett's dissertation on Knight's early work won the Joseph Dorfman Best Dissertation Prize for 1992 from the History of Economics Society.

In 1989, Emmett joined the faculty of Camrose Lutheran College (later Augustana University College) and created their degree program in economics (and eventually also in management). During his Augustana years, he published a two-volume collection of Knight's best essays, a three-volume collection of historical and analytical essays on the great financial crises of the 17th and 18th centuries ("Great Bubbles"), and an eight-volume collection of the work of economists at the University of Chicago from 1892-1946. He tends to date the start of the Chicago School in 1946, rather than earlier. He also published a number of articles on Frank Knight, economic historiography, and religion and economics. By 2000, it was apparent that Augustana would not survive as an independent institution and Emmett began to search elsewhere. The school was merged into the University of Alberta by 2005, but he departed in 2003 to join the faculty of James Madison College at Michigan State University. As he prepared to leave, he wrote two more essays on religion and economics, one of which was included in the volume "Faith, Reason, and Economics," published in honor of my supervisor at the University of Manitoba, Anthony Waterman.

At MSU, Emmett taught political economy, and also in the political theory and constitutional democracy major in James Madison College. He published a collection of his essays on Frank Knight, Chicago economics, and religion and economics ("Frank Knight and the Chicago School in Economics," 2009: my choice of title was declined by the publisher, but it was "Did the Chicago School Reject Frank Knight? and Other Essays"). The answer to the first question in his title, which was the title of an essay in the volume, was Yes. He also released a new edition of Frank Knight's "The Economic Organization" (including all the drafts of the corrections Knight had tried to make to his remarks about capital theory in the original version); a two-volume biographicsl dictionary of American economists whose primary work was published prior to 1950; and the "Elgar Companion to the Chicago School of Economics." Emmett also wrote many of his favorite essays while at MSU: "Exegesis, Hermeneutics, and Interpretation" (2003); "De Gustibus Est Disputandum: Frank Knight's Response to George Stigler and Gary Becker's De Gustibus Non Est Disputandum" (2006); "Frank H. Knight, Max Weber, Chicago Economics, and Institutionalism" (2006); "Specializing in Interdisciplinarity: The Committee on Social Thought as Chicago's Antidote to Compartmentalization in the Social Sciences" (2010), and "Sharpening Tools in the Workshop: The Workshop System and the Chicago School's Success" (2011).

In the fall of 2017, Emmett received an invitation to join Arizona State University to assume the position of director of the Center for the Study of Economic Liberty, and also join the newly founded School of Civic and Economic Thought and Leadership as a professor of political economy. He began his position at ASU in February 2018.

Center for the Study of Economic Liberty, ASU: http://economiclibertyasu.com

"Reading the Hermeneutics of Suspicion with Suspicion: A review essay on Nancy MacLean's Democracy in Chains. Research in the History of Economic Thought & Methodology. Forthcoming (2019).

"The Entrepreneur." In Handbook of Economic Theology, edited by Stefan Schwartzkopf. Routledge. Forthcoming.

"Specializing in Interdisciplinarity: The Committee on Social Thought as Chicago's Antidote to Compartmenatlization in the Social Sciences." In The Unsocial Social Science? Economics and Neighboring Disciplines since 1945, edited by Roger E. Backhouse and Philippe Fontaine. History of Political Economy 42 (2010 supplement): 261-87.

(Ed.) The Elgar Companion to the Chicago School of Economics, Edward Elgar, 2010.