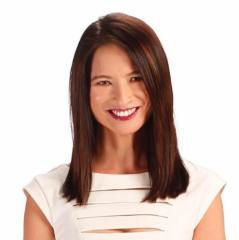 Mi-Ai Parrish leads Arizona State University Media Enterprise and is the Professor for Media Innovation and Leadership at the Walter Cronkite School of Journalism and Mass Communication. She is president and CEO of MAP Strategies Group, based in Phoenix.

Ms. Parrish served as president and publisher of The Arizona Republic/AZCentral.com and market president at USA Today Network, where the team won the 2018 Pulitzer Prize for “The Wall,” a multi-layered, multi-media examination of the southern border with Mexico. Prior to The Arizona Republic/USA Today Network, Ms. Parrish held similar leadership roles at the Kansas City Star, and (Boise) Idaho Statesman, and an array of newsroom roles at (Minneapolis) Star-Tribune, the San Francisco Chronicle, among others. Parrish was the first Korean-American publisher in mainstream media, first BIPOC publisher in Idaho, Kansas City and Phoenix, and first woman publisher in Kansas City. She continues work in diversity and inclusion in media, the weaponization of information, and coverage of justice and equity. She is the chairwoman of Poynter Institute Board of Directors, vice-chairwoman of Banner Foundation Board of Directors, secretary of Greater Phoenix Leadership, and serves on the boards of the Associated Press, Common Sense Media, the O'Connor Institute for American Democracy, The 19th* News, Arizona Community Foundation, and others. She's served four times as a Pulitzer Prize juror.

She holds a bachelor’s of science in journalism from the University of Maryland, College Park.