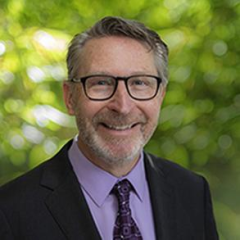 Jeffrey Cohen is the dean of humanities in The College of Liberal Arts and Sciences at Arizona State University. Professor Cohen comes to ASU from George Washington University in Washington, D.C., where he served as a professor and chair of the department of English. During his 23-year tenure there, he founded the Medieval and Early Modern Studies Institute, which brought together 22 faculty members across nine departments, as well as allied faculty from area institutions. He currently serves, with Stacy Alaimo, as co-president of the Association for the Study of Literature and the Environment (ASLE), the largest professional organization in the environmental humanities.

His research examines strange and beautiful things that challenge the imagination, phenomena that seem alien and intimate at once. He is especially interested in what monsters, foreigners, misfits, inhuman forces, objects and matter that won't stay put reveal about the cultures that dream, fear and desire them. He is widely published in the fields of medieval studies, monster theory, posthumanism and ecocriticism. His book, “Stone: An Ecology of the Inhuman,” received the 2017 Rene Wellek Prize for best book in comparative literature from the American Comparative Literature Association. In collaboration with ASU Professor Lindy Elkins-Tanton, he recently co-wrote the book “Earth,” a re-examination of Earth from the perspectives of a planetary scientist and a literary humanist. Currently, he’s co-writing a book titled "Noah's Arkive: Towards an Ecology of Refuge."

At ASU, Professor Cohen is laying the groundwork for projects that intensify the university's strengths in the environmental humanities; increase opportunities for the work of humanities scholars to reach wider publics; and ensure the next generation of scholars, teachers and researchers (especially in traditional fields) is the most diverse to date.

Founder of the medieval studies group blog In the Middle <inthemedievalmiddle.com>. The blog has been accumulated more than 3 million page views, received Cliopatria’s “Best Group Blog” award for 2007 and has been featured in the Chronicle of Higher Education and Inside Higher Education.

"Noah's Arkive: Towards an Ecology of Refuge." Co-authored with Julian Yates. Under contract with the University of Minnesota Press, delivery 2019.