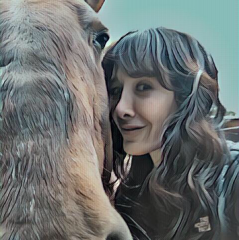 Joanne Cacciatore is an associate professor at Arizona State University in the School of Social Work and has been with ASU since 2008.

She is the founder and president of the international nonprofit organization, the MISS Foundation, and she also specializes in counseling those affected by traumatic losses, most often the death of a child. Her therapeutic interventions are all mindfulness-based including ATTEND and other mindfulness-based bereavement care systems. She is starting the very first carefarm in the world for traumatic grief.

As the founder of the MISS Foundation, she is an advocate of “green” mental health care and a member of the Association for Contemplative Mind in Higher Education, the International Society for Traumatic Stress Studies, and the National Center for Crisis Management. She is regarded as an expert in traumatic loss and child death in families, and has been counseling and aiding  individuals and families since 1996. She spearheaded and now directs the Certificate of Trauma and Bereavement graduate program and is a faculty affiliate in the Family Communication Consortium at ASU.

Cacciatore is an acclaimed public speaker and provides expert consulting and witness services in the area of traumatic loss. Her research has been published in peer reviewed journals such as The Lancet, Death Studies, Omega Journal of Death and Dying, Birth, Affilia, Social Work and Healthcare, Social Work, and Families in Society. Her new book, "Bearing the Unbearable: Love, Loss, and the Heartbreaking Path of Grief," hit Amazon's best seller in four categories.

Cacciatore received her doctorate from the University of Nebraska-Lincoln and her master's degree and bachelor's degree in psychology from Arizona State University. Her work has been featured in major media sources such as People and Newsweek magazines, the New York Times, Boston Globe, CNN, National Public Radio, and the Los Angeles Times. She received the prestigious Hon Kachina Award in 2007, and the Sr Teresa Compassionate Care Award in 2008. She is a mother to five children, now mostly grown, she notes “ four who walk and one who soars.” On a personal note, she has been a vegetarian since 1976 and enjoys hiking, reading, surfing and rock climbing.

Her life changed profoundly in 1994 when her infant daughter, Cheyenne, died.