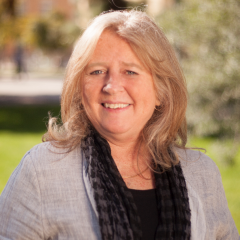 Barbara is currently the Assistant Director of Academic Services in the School of Internatinal Letters and Cultures (SILC). In her youth, she lived abroad with her family in France, England, and Iran and had the opportunity to spend extended time abroad in Mexico.  She earned her MA in French Literature from ASU, and has taught lower-division French for SILC since 2004.  Barbara has a background in study abroad and was international coordinator of faculty-directed, partnership, and exchange programs for Western Europe at the Arizona State University Study Abroad Office from February 2008 to October 2011.  She speaks French, and has studied some Italian, Spanish and German.