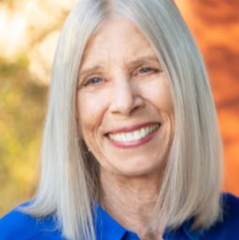 Terry Greene Sterling is the Walter Cronkite School’s Writer-in-Residence and a faculty affiliate. A three time Arizona Journalist of the Year, she's the Editor at Large for the Arizona Center for Investigative Reporting. She grew up on an Arizona cattle ranch and was born into a family with roots in both Mexico and the United States. She has devoted her 40-year journalism career to writing about the people, places and politics of the American southwest. Her book, ILLEGAL, LIfe and Death in Arizona's Immigration War Zone,  was published in 2010 by Globe Pequot Press/ Lyons.  She's the coauthor, along with Jude Joffe-Block, of Driving While Brown: Sheriff Joe Arpaio Versus the Latino Resistance published by the University of California Press in 2021. The book chronicles one community's fight to dismantle unconstitutional policing. Since joining the Cronkite School in 2003,  Greene Sterling has taught Graduate Reporting, Undergraduate Reporting, Magazine Writing, Cronkite Writers' Workshop, Depth Reporting,  Sustainability Writing, Food and Media and Reporting Indigenous Communities. She was a director at Cronkite News. at the Cronkite School, and is designing a new online Food and Media class for Fall, 2018. Her writing has appeared in many newspapers and magazines, including The Washington Post, Slate, The Atlantic, Rolling Stone, The Guardian, The Daily Beast, Newsweek, The Arizona Center for Investigative Reporting,  salon.com, The Village Voice, Longform, The Nieman Narrative Digest, Preservation Magazine, Arizona Highways, PHOENIX Magazine, The Arizona Republic and High Country News.   A winner of over 50 national and regional journalism awards, was honored for 25 years of Notable Journalism by Sigma Delta Chi. She earned a Master of Fine Arts degree in Creative Nonfiction from Goucher College in 2004 and a Bachelor of Arts degree in Journalism from the Cronkite School in in 1984. She lives  in the Sonoran Desert with her husband and a white dog that eats carrots.